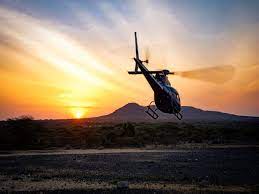 Excelsior Correspondent
LEH, June 29: The helicopter services in Ladakh are now open for tourists to travel across the Union Territory, with the first batch of tourists having already availed the heli-service, officials said.
The first batch took the helicopter ride here on Tuesday.
The helicopter services operated by the administration will be available to the locals and tourists in general across sectors in the Union territory, they said.
Rates to avail the service have been notified by the administration for the residents of Ladakh, according to the order from Ladakh’s civil aviation department.
“Individuals desirous of booking on the notified routes can book the tickets online at https://heliservice.Ladakh.Gov.In/”, the order said.
A distinct booking mechanism has been made available on the portal for passengers other than the residents of Ladakh, they said.
The order said that the availability of a ticket will depend upon the number of passengers, weather conditions, or any other operational restrictions.
The administration has opened the services with two choppers — a five-seater B-3 chopper and a larger Mi-172–, they said.
The services will cover Leh, Kargil, Padum, Lingshed, Dibling, Neyrak, Diskit, Turtuk, Srinagar, and Jammu to begin with, they said.