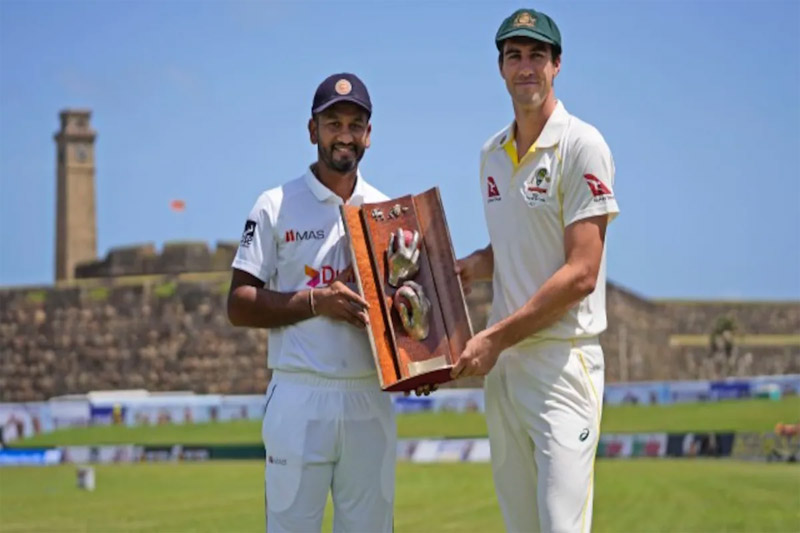 Galle, Jul 1: Spinners Travis Head and Nathan Lyon took four wickets each to give Australia a 10-wicket win over Sri Lanka in the first session on the third day of the first cricket Test on Friday.

Opting to bat first after winning the toss, Sri Lanka made 212 in its first innings.

Australia was still batting in its first innings when play resumed on the third day on 313-8 and fast bowler Asitha Fernando bowled Pat Cummins (26) with a yorker.                   Fernando later sent an in-swinger to bowl Mitchell Swepson (1) to end Australia’s first innings at 321, conceding a 109-run first-innings lead.

Sri Lanka made only 113 runs in its second innings leaving Australia five runs to win and David Warner finished the match in four balls.

“We failed to push them. We found their spinners put pressure on us and made life difficult.”

Head, bowling his part-time off spinners, took four wickets in the space of 17 deliveries to return 4-10. He had not taken a wicket in the 26 previous test matches.

Lyon continued his good form, taking 5-90 in the first innings to return 4-31 in the second. He is now placed 10th on the list of all time highest wicket takers in Test cricket with 436 wickets, passing big names like New Zealand’s Richard Hadlee (431), Sri Lanka’s Rangana Herath (433) and India’s Kapil Dev (434) during the test match.

“Nathan Lyon showed his class, he looked unplayable out there and built off the back of a really good batting day,” Australia captain Pat Cummins said.

“When you’re bowling you want things to happen quickly like that, as opposed to in the past we’ve been the batting side and it feels like things move quickly.”

Cummins also praised Cameron Green, whose 77 on a difficult pitch earned him the player of the match award, saying he learned the art of playing on a turning track quickly even though he was batting on that kind of a pitch for the first time.

Sri Lanka started its second innings briskly with the intention of wiping out the deficit quickly on a pitch that helped spin bowlers.

Kusal Mendis and Oshada Fernando, who came into the match as a replacement for Angelo Mathews who had tested positive for COVID-19 earlier in the day, shared 20 runs for the third wicket before Mendis top-edged a sweep for a catch to Swepson at square leg.

Green (77) and Usmal Khawaja (71) made half-centuries for Australia in the first innings. Off spinner Ramesh Mendis bowled best for Sri Lanka with 4-107.