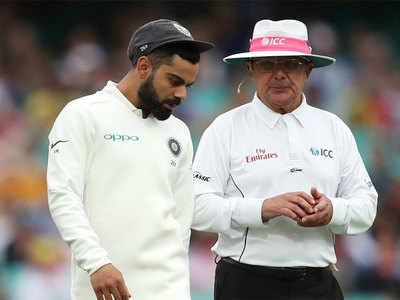 NEW DELHI: Virat Kohli is one “funny man” having the whole of India on his back, says former ICC elite panel umpire Ian Gould, who also appreciated the modern-day great’s timely change in behavioural approach.

“He’s a funny man. Yeah, he batted like me a couple of times. I had to tell him off for slogging it. He’s a charmer. He’s one of those guys who’s got, a bit like Sachin Tendulkar, the whole of India on his back, but you wouldn’t know,” Gould was quoted as saying by ESPNcricinfo.

The 62-year-old retired English umpire added, “You could walk into a restaurant and sit and chat with him for hours. He’s a very worldly boy.”

“When you look at Virat, you’re thinking male model, pin-up boy, but he knows about the game inside out, the past, history. Lovely guy.”

He was asked about Kohli’s past run-ins with the authority.

“I can see why. But he’s learned to be respectful,” Gould said.

“He could have continued his career like that and people could be talking totally the opposite about Virat. He’s a nice man and the India boys are very, very good people, very respectful.” (AGENCIES)