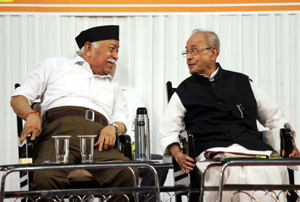 NAGPUR, June 7:  Warning that hatred and intolerance diluted national identity, former President and Congress veteran Pranab Mukherjee today spoke from an RSS platform to declare nationalism was not bound by race or religion, as he called for dialogue to reconcile differences.
As his visit to the RSS headquarters in Nagpur to address the new recruits of the organisation sparked criticism from some Congress leaders including his daughter, Mukherjee, 82, cautioned that any attempt to define India through “religion, dogma or intolerance” will only dilute the country’s existence.
Declaring that India’s soul resides in pluralism and tolerance, Mukherjee said he is convinced that nationalism can only come out of the ideological fusion of Hindus, Muslims, Sikhs and other groups in India.
He also called for freeing public discourse from fear and violence. “Every time a woman and child is hurt, the soul of India is wounded.”
Dressed in a traditional dhoti, kurta and a black waist coat, Mukherjee said people are at the centre of all activities of the State and that nothing should be done to divide them.
“The aim of the State should be to galvanise them to fight a concerted war against poverty, disease & deprivation. Only then can we create a nation where Nationalism flows automatically,” he said.
Asserting that India’s identity has emerged through a long-drawn process of confluence, assimilation and co-existence, Mukherjee made a passionate speech on ‘nation, nationalism and patriotism’ in the context of Bharat that lasted nearly 30 minutes.
“From our Constitution, flows our nationalism. The construct of Indian nationalism is constitutional patriotism, which consists of an appreciation of our inherited and shared diversity… Secularism and inclusion are a matter of faith for us. It is our composite culture which makes us into one nation.”
Mukherjee’s message to hundreds of ‘pracharaks’ and top-brass of the Rashtriya Swayamsevak Sangh, which is often described as a Hindu right-wing organisation, was described as a ‘mirror of truth to the RSS’ by the Congress, whose several leaders have so far been critical of his decision to attend the event at the Sangh headquarters.
At the same time, the Hindutva leaders including S Gurumurthy said Mukherjee talked about nationalism not being limited to any religious identity, which was the same message delivered by the RSS chief Mohan Bhagwat.
In an apparent reference to the ‘one-nation-one-culture ideology’ often identified with the RSS, Mukherjee said India’s nationhood is not “one language, one religion and one enemy”.
“It is ‘perennial universalism’ of 1.3 billion people who use 122 languages and 1600 dialects…Practice seven major religions… Live under one system, one flag and one identity of being Bhartiya and have ‘no enemies’. That is what makes Bharat a diverse and united nation,” he said.
Mukherjee, who served as President of India between 2012 and 2017, said, “Every day, we see increased violence around us. At the heart of this violence is darkness, fear and mistrust. We must free our public discourse from all forms of violence, physical as well as verbal.”
In remarks that come amid outrage over incidents of rapes including of minors, he talked about “soul of India” getting wounded, every time a child or woman is brutalised and “manifestations of rage are tearing our social fabric”.
Mukherjee said only “a non-violent society” can ensure the participation of all sections of people in the democratic process, especially the marginalised and dispossessed.
“We must move from anger, violence and conflict to peace, harmony and happiness,” he said.
Earlier in the day, Mukherjee described Keshav Baliram Hedgewar as a “great son of Mother India’ as he visited the birthplace of the RSS founder Sarsanghachalak.
“Today I came here to pay my respect and homage to a great son of Mother India,” Mukherjee wrote in a visitor’s book at Hedgewar’s birthplace ahead of his much-anticipated speech at the RSS headquarters here.
Mukherjee also talked about thousands years of Indian history, including the rules of various dynasties, Muslim invaders, a mercantile company and then the British empire.
He quoted from works of Jawaharlal Nehru, Rabindra Nath Tagore, Bal Gangadhar Tilak and others and praised Sardar Vallabhbhai Patel for uniting India by bringing the princely states into the main fold.
In his speech, Mohan Bhagwat said the debate over Mukherjee’s decision to attend the RSS event was “meaningless” and no one is an outsider for his organisation.
Mukherjee will remain what he is and the Sangh will remain the Sangh even after the event, he added.
Bhagwat said his organisation wants to unify the entire society and no one was an outsider for it.
People may have different views but they are all children of mother India, he said, adding the Sangh has been inviting prominent people to its event every year.
Those present at today’s event also included former Prime Minister Lal Bahadur Shastri’s son Sunil Shastri, as also Netaji Subhash Chandra Bose’s nephew Ardhendu Bose along with his wife and son.
Ahmed Patel, political secretary of Sonia Gandhi, was the latest congress leader to express his disapproval today at Mukherjee visiting the RSS headquarters, while the former President’s daughter Sharmistha has said her father was giving the BJP and the Sangh a handle to plant false stories with his decision to speak at the event. (PTI)