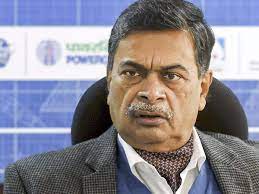 NEW DELHI, Jan 27: The green hydrogen policy will be unveiled in the next 10 days featuring incentives like free transmission for 25 years to boost production of this clean source of energy, Power and New & Renewable Energy Minister R K Singh said on Thursday.
“We will come out with the green hydrogen policy in the next 10 days. We will give free transmission for 25 years. So you can generate power for making hydrogen in Rajasthan or transport it to Guwahati or to Baruni refinery (to make hydrogen),” said Singh while addressing a virtual conference on smart metering organised by industry body CII.
The minister also said that the policy will feature dollar denominated bids, offer of land in renewable energy parks and land allocation near ports for creating bunkers for green hydrogen or ammonia.
“We want India to emerge as the exporter for green hydrogen… Japan wants to import and Germany also,” Singh said.
Raising the issue of payment for power supply, he said free power supply ultimately affects the entire value chain.
“If he (politician or public representative) wants to give 100 units free then he can do so from the budget. We don’t mind that. He can give entire taxpayers’ money for free electricity or water but then he would not be left with funds for development of roads and other works.”
The minister was of the view that if they (states) cannot pay the subsidy for free electricity from their budget then they should not promise such freebies.
He pointed out, “many states are finding it different to pay subsidies (given as free electricity). Many states don’t even have an account for these subsidies. Uttar Pradesh is one which doesn’t have an account for subsidies, they should be paying. The discoms don’t have an account under which they can ask for a subsidy from the state government.”
About smart metering, the minister informed that the government will come out with an approved list of models and manufacturers for smart meters.
In this regard, he said, “this is a big opportunity and there are crores of consumers here. If you have the capability then make it (smart meter) entirely here or you can start with 90 to 95 per cent (smart meter manufacturing) here… I don’t want to buy anything from our Northern neighbour (China).”
The minister also talked about the inbuilt IT capability of smart meters in view of cyber attacks threat.
Union Power Secretary Alok Kumar pointed to the chip shortage problem and said semiconductor chips should be produced more and more in India for faster roll out of the national smart metering programme. (PTI)