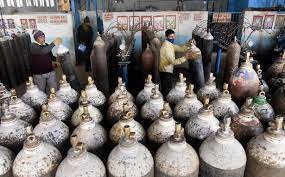 NEW DELHI, Jan 23: The customs department has given time till September 30 for the re-export high-quality containers which have been imported for efficient transportation of liquid medical oxygen during the second wave of Covid-19 pandemic.
In a circular to field formations, the Central Board of Indirect Taxes and Customs (CBIC) said it has received representations through the Department for Promotion of Industry and Internal Trade (DPIIT) for providing relaxations in the re-export of ISO containers imported temporarily for combating the Covid pandemic.
Such containers have been used for efficient transportation of liquid medical oxygen due to the inherent advantage related to multi-modal transportation (by road/rail/waterways/airways).
“Board hereby guides all the field formations to allow extension of time period for re-exports of ISO containers meant for transportation of Liquid Medical Oxygen grade, …. Till September 30, 2022, upon receipt of requests from the importers,” the CBIC circular said.
Currently, containers are allowed to be imported duty-free with the condition of re-export in the next six months.
If they are not re-exported within six months or the time limit as given by the CBIC, import duty is levied on such containers.
When the deadly second Covid wave hit India in April-May last year, there was a massive surge in oxygen demand and the government had taken a host of steps to increase domestic availability of medical oxygen. (PTI)