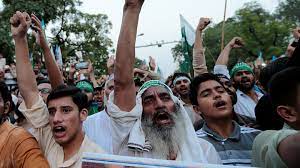 GILGIT BALTISTAN [PoK], Dec 7: Pakistan’s continuous efforts to keep the China-Pakistan Economic Corridor (CPEC) in progress are making the Gilgit-Baltistan (GB) residents in PoK angry as Pakistan continues to exploit the natural resources.
Pakistan Army was recently sent to Gilgit Baltistan under the pretext of protecting locals but on the contrary, it is actually facilitating the Chinese in the over-exploitation of natural resources and this is causing anger among the locals, reported IFFRAS. The presence of natural resources is a testament to the progress and prosperity of any region but ironically the case of GB is quite the opposite. The part is the most backward and ignored area since its inception despite having a very high potential for development. The region is endowed with rich mineral and water resources, worth billions of dollars but the people of the region face extreme poverty due to the indifference of policymakers towards their plight.
Recently, GB Chief Minister Khalid Khurshid Khan accused Islamabad of halving the development budget for the region to PKR 23 billion, a deliberate attempt to “push the region backwards”, according to to think tank.
Under the banner of CPEC, work has been initiated on mega dams, oil and gas pipelines, and uranium and heavy metal extraction in GB.
This has come at a cost to local livelihood and environmental sustainability. More importantly, GB provides over half of the drinking and irrigation water to Pakistan. Chinese mega projects are showing an adverse impact on the local climate leading to uncontrollable pollution and irreversible depletion of aquatic ecosystems, reported IFFRAS.
The Chinese companies engaged in the region pay scant attention to the local concerns in this environmentally sensitive region. Many accuse the China Roads and Bridges Corporation, a Chinese firm, of using devastating environmental practices in its expansion of the Karakoram highway in Gilgit-Baltistan.
However, the Chinese companies refused to share revenue from resource exploitation with them. Foreign companies don’t pay tax to the Gilgit government either, since they own their allegiance to the Islamabad-based federal institution called Gilgit-Baltistan Council (GBC), which has absolute control over legislative matters pertaining to minerals, forests, water reserves, trade and transit routes, and issues mining licenses to foreigners without consulting with the Gilgit Administration.
While Islamabad earns billions in revenue from the region annually from trade and transit, water resource exploitation, trophy hunting, eco-tourism, mineral exploration and direct and indirect federal taxes, the lion’s share of these earnings are not allocated for the development of the region. The autonomous region finds rare mention in mainstream media but is gaining significance as protests are becoming more frequent. (ANI)