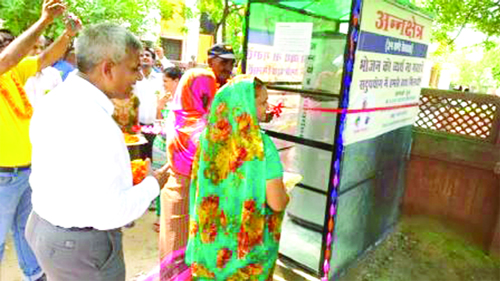 A common accessory to modern living like the fridge can make a huge difference to hungry and poor on the street as an innovative experiment in Jaipur shows. Rekha Pal reports
Sometimes a small idea can result in big results and make a difference to a whole lot of people. A community fridge for the poor in Jaipur, Rajasthan’s Pink City, is one such. A first of its kind initiative in India, some colonies- both posh and middle-class, in the city have put together a simple yet innovative idea to make a difference to the underprivileged and saving them from hunger pangs.
People looked curiously when recently a 450 litre refrigerator was placed in the city’s Mahesh Nagar locality which can store food for at least 400 people. A fridge in urban homes is almost an essential item today. The same facility, unavailable to the poor, can change the way they live and eat.
The core idea is that residents of the area would leave their surplus or leftover food in this fridge everyday, which would then be distributed amongst the poor and the needy next day.
The simple idea is to make people understand that the surplus food, which we often throw away can be easily stored in the community fridge, which can then be distributed amongst the poorest of the poor after a proper quality check. This way the food is not wasted and the needy would not have to starve. Foods vans have been pressed into service to collect the eatables and transport them to areas where there are poor people.
Annakshetra Foundation, which has been working in this field for over four years now, took the initiative to launch this new mission to stop food wastage and bridge the gap between wastage of surplus food and those who do not have enough to buy food.
Says Vivek Agarwal, heading the foundation: “Our single-minded belief is that nobody should sleep hungry. We have been collecting surplus food from weddings and social gatherings, restaurants, caterers and distributing amongst the poor. The food is generally distributed amongst people like labourers, rag pickers, waste collectors etc. who do not have enough money to buy food. Since most functions are held at night, our two vans collect food after the functions are over.”
Agarwal says that people of various residential associations, who came in contact with them and had seen and appreciated their work thought up of this unique initiative of community fridge and wanted to be a part of this social cause.
“The vans usually had duty during the night; we thought why not utilize vans in the mornings as well.”
The vans can be used to collect surplus food from the community fridge placed in various residential colonies in the mornings. People can keep their leftover and surplus food in the fridge after all their meals are over. “The food would be distributed only after medical and food experts check the food quality and certify in writing if the food is fit for consumption.”
The foundation has plans to install ten more such refrigerators across the city. The only requirements include a proper place for placing the fridge, electricity connection and also security to guard the fridge, which the resident associations have promised to provide.
The approximate cost for installing the refrigerator is about rupees one lakh, the maintenance of which has to be done by the residents themselves. Some banks, schools are also interested in getting these fridges installed outside their premises .
Residents of Jaipur have a tradition of feeding animals and birds, especially cows, and also give food to beggars at the temples. Most people now think the fridge is a pioneering idea to help the deprived class.
Says Navha Sisodiya, a resident of Mahesh Nagar area : “It is a unique initiative to work towards zero wastage of food and to help the poor. We throw away surplus food or give it to dogs and other animals but now we can store it up for needy people.”
Agarwal says that he had read reports that a person in Saudi Arabia’s Hail city had placed a refrigerator outside his house last year and called on neighbours to fill it up with surplus food for the needy. This had set him thinking before he floated the idea before the people, who gladly wanted to put in their resources to help the poor and marginalized.
According to the Global Index Hunger, India ranks 55th in the 2014 enumeration, lagging behind Nepal and Sri Lanka. Its hunger status is classified as “serious” in the report prepared by the International Food Policy Research Institute and NGOs
Welthungerhilfe and Concern Worldwide.
Besides, India is home to the largest number of chronically malnourished and stunted children under five.
The Global Hunger Index (GHI) is designed to comprehensively measure and track hunger globally and by country and region. It is calculated each year by the International Food Policy Research Institute (IFPRI). ? (TWF)