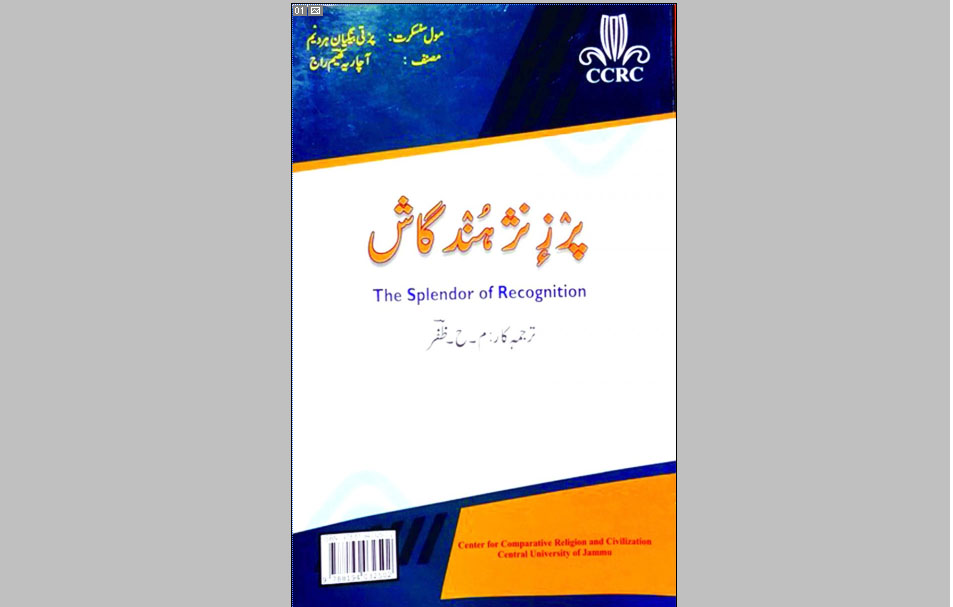 Adarsh Ajit
Shaivism/Self-realisation/Consciousness/Trikka philosophy have been the topics thoroughly debated since ages. Many have tried to make these philosophies understandable to the common people because these topics are believed to be difficult to understand or to exercise. Among many Shaivist scholars, Late Swami Lakshmanji is known worldwide. M H Zaffar terms Swami Lakshmanji a saint and highly knowledgeable of twentieth century.
Praznatch Heund Gaash (The Splendour of Recognition) is an excellent translation work by M H Zaffar, an authority on Shaivism, of Acharya Khem Raj’s Pratyabhijnahrdayam. Zaffar seems master of both the languages, the Sanskrit and the Kashmiri. Translation is in both the scripts, Nastaaliq as well as Devnagri. Zaffar gives two types of short explanations to every sutra and then explains each sutra in detail quoting iconic Shaivist and Sufi poets making the sutras understandable to a common person. Sayings and couplets included in the book strengthen the explanations and reinforce Zaffar’s show of ability. To his defence Zaffar quotes from Quran, Bible, Vedas and Gita also. The translation work is arranged in such a way that all sutras are connected to one another by soul. Kashmiri words are so nicely used that this reviewer is compelled to include some with their nearby English translation such as dai (God), tseth (consciousness).
Tseth (consciousness) is claimed to be the cause of the existence of this universe. It brings salvation. Explaining it, Zaffar talks about the evolution of the human knowledge saying some questions have no barriers of the boundaries. Tseth is the source of this universe. The other names of ‘tseth’ have been given as Shiva/God or dai. World is the light/manifestation/advent of God. Soul is ‘consciousness’.
The meaning of every existence is ‘consciousness’. The centre of every existence is ‘consciousness’. And without ‘consciousness’ no existence exists. The book explains whatever big the universe is but it is just a part and tseth (consciousness) is boundless. ‘Consciousness’ has been referred to ‘fire’. When the life gets strength of consciousness, it absorbs the whole universe in it. Tseth is present in every particle but no particle can represent ‘tseth’ as a whole. Zaffar quotes Swachh kraal:
joyi manz basith chui kuli daryaavo/naav dar aab tai aab daryaavo.
‘Shrokeomut tseth’ (shrunken tseth) is born in worldly affiliations. Sutra 6 clarifies what heart does and what is its impact on our lives. Unless the man does not know and understand rajasik, tamasik and satvik properties he continues to be their slave. All philosophies are the different stages of ‘tseth’ (consciousness). Shaivism is not any knowledge but is a way to salvation. HE is one. Self-exercises lead us to ‘self’. The living does not recognise the true self due to being lost in the mundane. The Absolute Truth or Shiva is unique and is limitless. Knowing Trikka philosophy is the knowing of tothas (elements/constituents). The human heart is nothing but limitless tseth, immortal, and truth in originality. Mahaashunya(Super-zero/ Absolute blankness) is not ‘not having’ but is having. It is action, which is going on unabated. The living, this material world, and we are in fact one existence, one recognition, one basics and having one root. Man thinks he is different from others. He differentiates things and beings but he is deluged:
akh tsa ta beyi ba ganzar mabaa/haba yi chui gumaanai
The five actions of Shiva, god or dai are 1-to make the universe 2-to sustain it 3-to finish it 4-to hide one’s own existence 5- to bless those who get his favour and love. These are the basic principles of ideology of Shaivism. It is a total illusion for the living that they are the doers. Only God is the doer:
hanzov naav chhai bahaanai/ taarvun taar diyi paanai…
The blessings are very important for samadhi. Man experiences feeling of samadhi due to kindness, favour and blessings of God. With knowing of the self, man attains permanent samadhi. And the kernel of this experience is light and peace. Knowing the self is to acquire light and peace. It is of highest level of knowing. It is the inner as well as outer feeling of light. One who is a slave of body cannot know or understand his ‘consciousness’. Last Sutra says that everything is Shiva /dai. Zaffar in his interpretation says that man in the circular path of life reaches the same point wherefrom he starts his journey. We visit far off places, see and watch various cultures, experience different geographical circumstances, meet different people with their respective languages but finally we return home. Similar is the path of spirituality and our home is dai/Shiva who is the source of everything. According to Lal Ded:
aamen taaken poaen zan shamaan/zuv chum bramaan ghar gatchha ha
In the end of the book Khem Raj says, ‘This directive is made for those people who have been blessed by dai/God’. Acharya Khem Raj also wishes good for the whole universe.