JAMMU, Aug 14: A fierce gun battle triggered between security forces and a group of terrorists in Rajouri district of Jammu and Kashmir on Sunday.

“An operational contact has been established with terrorists in Kander Hills of Rajouri this evening at around 7:30 pm,” Army sources said.

The teams of army, SOG and police launched search operation in view of beefed up security on the eve of Independence Day when the contact was established.

Two to three terrorists are reportedly trapped in the gunfight. 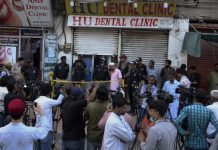