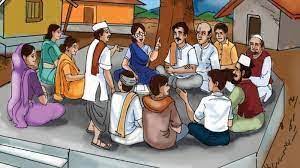 Funds, functions and functionaries , or the three “Fs” coined by Lieutenant Governor Manoj Sinha as modes of empowerment of our Panchayati Raj Institutions sums up the resolve of the UT Government to ensure that a new chapter was written in the ”gatha” of Panchayati Raj movement in Jammu and Kashmir. 73rd and 74th amendments to the constitutions widened the scope of functions , say powers of the three tier system of Panchayati Raj Institutions the implementation of the provisions of which is poised to change the face of the rural areas of Jammu and Kashmir through proper functioning of Panchayats. May we, in this connection, analyse the scenario in its perspective in that it is no longer a ”one sided traffic” now but fuller participation of all stakeholders related to functioning of Panchayat and that is what we are witnessing with satisfaction in the UT. These institutions are virtually brimming with funds support as also the powers to spend for the overall development of the respective villages. That representatives of Panchayats, as in the recent case a delegation of 55 members, interacting on the issues and calling on the Lt. Governor points to priorities , the people are increasingly showing their interest in. Peoples’ participation or the ”Jan Bhagidhari ” was key to democratically functioning of the Panchayats as was duly shared in the said interaction which in turn could result in intensifying the developmental works and ensuring such initiatives reaching the people right at their door steps which could give a feel of there being “our Panchayats ” in Jammu and Kashmir.