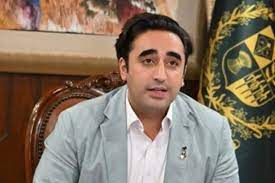 Karachi, Dec 1: Pakistan’s Foreign Minister Bilawal Bhutto-Zardari has termed the East Pakistan debacle in 1971 a “colossal military failure,” in a veiled jibe at the former Army chief Gen Qamar Javed Bajwa, who termed it a “political failure.”
Bilawal made these comments at the Nishtar Park rally, which was organised to mark the 55th Foundation Day of his Pakistan Peoples Party (PPP).
On the occasion, the PPP chairman revisited the history of his party and recounted the achievements of its founder, his grandfather, Zulfikar Ali Bhutto.
“When Zulfikar Ali Bhutto took over the government, the people were broken and had lost all hope,” he was quoted as saying by the Dawn newspaper.
“But he rebuilt the nation, restored the confidence of the people, and finally brought our 90,000 troops back home who had been made prisoners of war due to ‘military failure’. Those 90,000 soldiers were reunited with their families. And that all was made possible due to politics of hope… Of unity… And inclusion,” he added.
Days before his retirement on November 29, Gen Bajwa termed the East Pakistan debacle a “political failure,” and complained that the sacrifices of the troops were never properly acknowledged.
He rejected the commonly held notion that 92,000 soldiers surrendered in the 1971 war and claimed that there were just 34,000 combatants, while the others were part of different government departments.
While addressing a Defence and Martyrs Ceremony at the General Headquarters in Rawalpindi last week, Bajwa said: “I want to correct the record. First of all, the fall of East Pakistan was not a military but a political failure. The number of fighting soldiers was not 92,000, it was rather only 34,000, the rest were from various government departments.”
Gen Bajwa, 61, retired on November 29 after getting a three-year extension in 2019 by the then Prime Minister Imran Khan, who turned out to be the biggest critic of the Pakistan Army.
The East Pakistan debacle in 1971 saw Pakistan suffering a humiliating defeat to India.
It saw East Pakistan secede to form a new country called Bangladesh. (PTI)