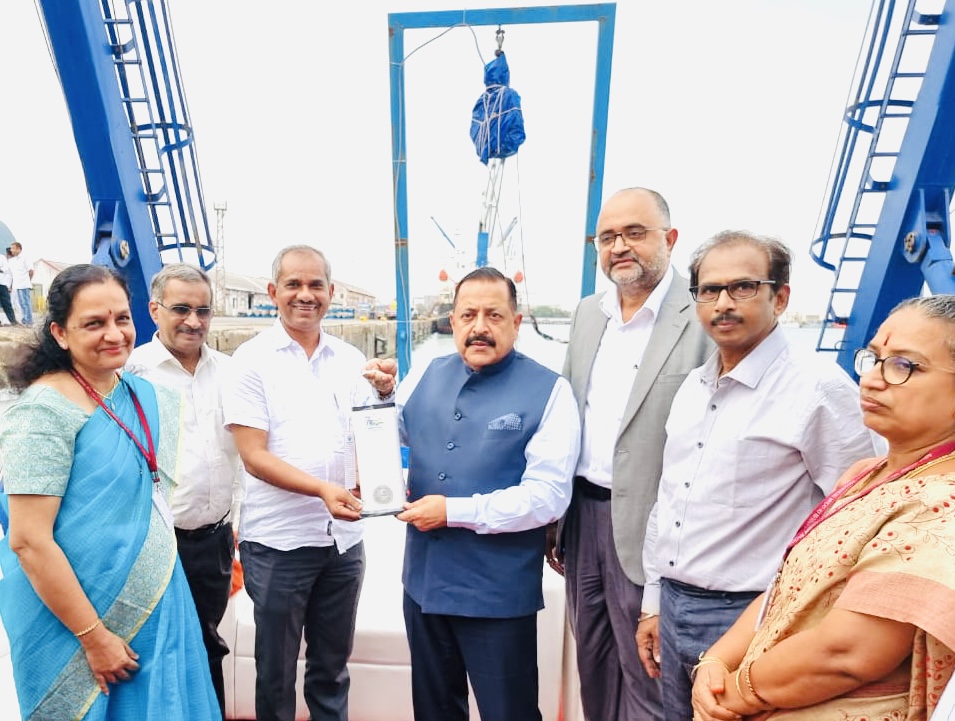 CHENNAI, August 13 : Union Minister of State (Independent Charge) Science & Technology; Minister of State (Independent Charge) Earth Sciences; MoS PMO, Personnel, Public Grievances, Pensions, Atomic Energy and Space, Dr Jitendra Singh has launched India’s first “Saline Water Lantern” from the Chennai Harbour. This unique application of technology uses the sea water as the electrolyte between specially designed electrodes to power the LED lamps.
Dr Jitendra Singh unveiled the first-of-its-kind Lantern named “Roshni” on board the Research Vessel Ship “Sagar Anveshika”, operated and used by the National Institute of Ocean Technology (NIOT), Chennai for coastal research.
The Minister said, Saline Water Lantern will bring “Ease of Living” to the poor and needy, particularly the fishing community living along the 7,500 Kilometres long coastal line of India.
Dr Jitendra Singh said that Saline Water Lantern will also boost and supplement Prime Minister Narendra Modi’s UJALA scheme launched in 2015 for distribution of LED bulbs across the country. He said, Roshini Lamps along with Power Ministry’s schemes like Solar Study Lamps will be driving a vibrant renewable energy programme aimed at achieving energy security, energy access and reducing the carbon footprints of the national economy.
Dr Jitendra Singh also pointed out that this technology can also be used in the hinterland, where sea water is not available, as any saline water or normal water mixed with the common salt can be used to power the lantern, which is not only cost-effective, but very easy to operate. The Minister lauded the NIOT team for inventing the Roshini Lamp and advised them to transfer the technology to the industry for mass production of this multipurpose lamp which can be of immense help in rural and remote areas and in the times of the disasters.
Later, Dr Jitendra Singh along with the Secretary, MoES Dr. M. Ravichandran visited the laboratories and hoisted tricolour on board the ship. Extending the campaign of ‘Har Ghar Tiranga’, to ‘Har Jahaz Tiranga’ the Minister hoisted the Indian flag on board the vessel. He also met the senior scientists of NIOT onboard the vessel and reviewed the progress of the implementation of the Deep Ocean Mission of India.
Dr Jitendra Singh also reviewed the progress of NIOT developed Low Temperature Thermal Desalination (LTTD) technology for conversion of sea water to potable water, which has been successfully demonstrated in Lakshadweep islands. He informed that three desalination plants based on the LTTD technology have been developed and demonstrated at Kavaratti, Agati and Minicoy Islands of Union Territory of Lakshadweep. The capacity of each of these LTTD plants is 1 Lakh litre of potable water per day.
Secretary, MoES Dr. M. Ravichandran apprised Dr Jitendra Singh that based on the success of these plants, Ministry of Home Affairs (MHA) through Union Territory (UT) Lakshadweep has entrusted the work of establishing 6 more LTTD plants at Amini, Androth, Chetlet, Kadmat, Kalpeni and Kiltan with a capacity of 1.5 lakhs litres/day. The LTTD technology is found suitable for Lakshadweep islands where the required temperature difference of about 15⁰C between sea surface water and deep-sea water is found in the vicinity of Lakshadweep coasts only as of now.
The cost of desalination plant depends on a number of factors inter alia which includes technology used and location of the plant. The total cost of the six LTTD plants in Lakshadweep islands is Rs. 187.75 cr.