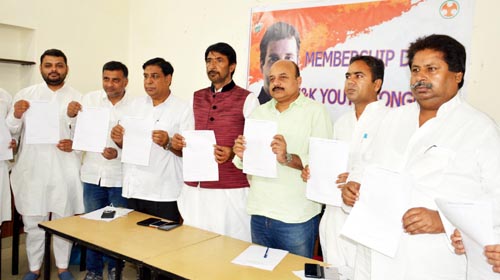 Excelsior Correspondent
JAMMU, June 29: Indian Youth Congress today launched membership drive for Jammu and Kashmir State for holding organizational elections to the State unit of Youth Congress.
A function was held at party headquarters here today, in which PCC president GA Mir was chief guest while Raman Bhalla vice president PCC, Ravinder Sharma chief spokesperson PCC, All India IYC Election Commissioner Jai Ram Pathak, PRO for J&K Maqsood Mirza besides IYC In-charge Sheshpal Singh Keharwal and PYC president Pranav Shagotra were prominent those present, when membership was launched.
The IYC Election Commissio-ner Jai Ram Pathak announced that the Membership shall remain open till 27th July 2018. Thereafter, scrutiny and election process for State, district and Assembly unit shall be held as per scheduled. On the occasion, the post of district presidents for three districts were declared for SC/STs by draw of lots. PRO Maqsood Mirza explained the entire process of membership and election.
Addressing the gathering, Mir exhorted the youth to come forward to become members of the premier and oldest political party of the country which has history of attaining freedom for the country and strengthen democracy in the free India with equal opportunities to all. Every Congress man should be proud to be member of such a grand old party which has young leadership of Rahul Gandhi and an experienced leadership from all sections and spheres of life.
Mir said that the challenge posed by communal and divisive forces has to be countered by Congress party being secular forces in the country. He appreciated the Youth Congress for playing a lead role in the mission of the Congress party to expose communal and divisive forces.
Sheshpal singh said that the present committee would continue to work till elections are announced.
It is pertinent to mention here that the said membership drive is the integral part of the process which is in tendum with the internal organizational elections of the Congress party which is the brain child of the AICC president Rahul Gandhi in order to promote democratic values within the party and in the country.