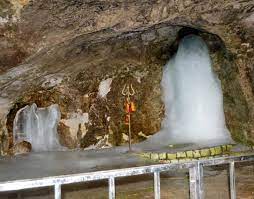 Not only the specific shrine place of Holy Shree Amarnath in Kashmir is typically placed geographically but from both the routes leading to the shrine, there are different kinds of landforms, heights, elevations, frozen paths , icy cold water flowing , lakes, dry and hostile mountains etc which are not only absolutely scenic and enchanting when one visualises what the nature can make and how spell binding is its sublimity but certain mysteries too are there which ordinarily is beyond one’s imagination . That may not be directly attributed to or linked necessarily with any spirituality or knowing more about the divinity. The recent tragic incident of a cloudburst and the trail of death and destruction it brought in its wake near the Shrine has raised several questions as to whether such type of tragedies cold be prevented by employing any of the available modern techniques and expertise in the sense, as a result, taking such steps by the UT Administration that there would be no or minimal impact. The concern and the tension coupled with the issue especially when the safety of the lives of the pilgrims being the prime concern have led to deciding about employing techniques to surveying the area in a cogent and precise manner hence the choice falling on mapping is thought to be of immense utility.
The decision of the UT Government, therefore, in arranging through the auspices of the Surveyor General of India to conduct a digital contour mapping of the Amarnath Shrine area is quite interesting including presumably as a result of advice from the experts . This exercise, it is believed, can vastly help and guide the Government as to how best precautionary measures could be taken to prevent loss of human lives due to natural calamities the likes of which we unfortunately saw a few days ago which claimed 15 precious lives , causing injuries to over 55 and now the news that no one was reported to be missing as conveyed by the Lieutenant Governor himself, is a matter of great relief as against previously the persons having gone missing was feared to be 40. In fact , the proposed exercise is expected to show more clearly the details of the elevations, heights and other aspects of the typical but quite interesting geographical nature of the area so as to devise strategies.
This exercise is the first of its nature and since the intentions as well as the objectives behind this proposed exercise being to prevent loss of lives and in mitigating the sufferings of the victims should such type of natural calamities unfortunately recur any time in future around this area, it is hoped better and encouraging results would emanate. The contention that a ”bund” having been constructed around there some time ago by Irrigation and Flood Control Department proved of immense help in preventing more loss of life, therefore, should more of such constructions be raised in vulnerable areas as will be guided by the proposed contour mapping, must be decided in the right earnest. Here , it is pertinent to mention here that raising any type of constructions around the area is in itself a courageous venture looking to extreme and unavoidable difficulties encountered there and , therefore, the concerned Department deserves commendation for construction of the ”bund”.
However, to what extent knowing details about the area specific albeit contour digital mapping would really be beneficial would be known in due course but the fact is that such mapping will guide which places could be comparatively safer for making provision for camping and fixing of tents for the pilgrims in case of an unforeseen natural calamity . We , however, on the other hand, have our fingers crossed about much coming out of this exercise as nature remains unexplored and unpredicted hence invincible in situations like associated with the annual pilgrimage to the Holy shrine. We cannot know precisely the secrets of the nature especially of the nature of unforeseen happenings but knowing as much as possible all about possible safeguards and implementing them should be a constant endeavour.
Taking the example of the famous Sheshnag lake en-route the Holy shrine , which is an alpine high altitude lake which has been in existence for thousands of years, has no date of its origin mentioned in any book anywhere. A mystery indeed. It is 250 feet deep with an area of 5 kms , but presently covering not more than over 1 km. If academicians and experts in the concerned fields start extensive studies and researching about this lake, much could be known though climatic conditions could prescribe limits. Hence, contour mapping should not remain confined to the shrine area only but more areas around should be covered.