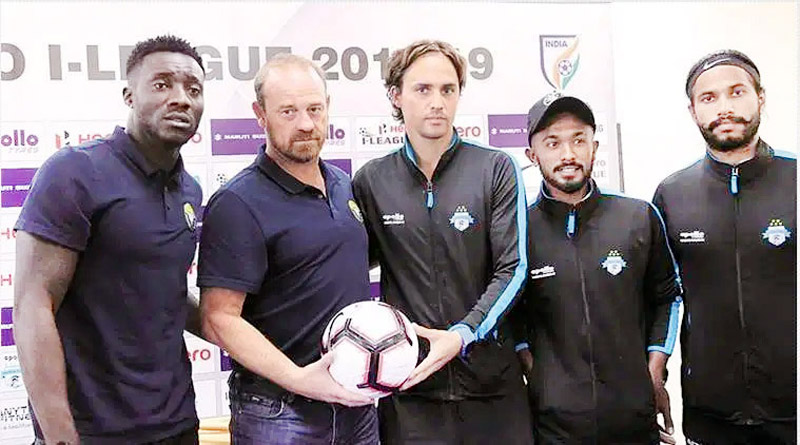 New Delhi, Apr 5: Desperate to get back to his ailing mother in Scotland, Real Kashmir FC coach David Robertson and his UK-based players’ stay in Srinagar has got extended due to unavailability of chartered flights from the valley.
With his mother undergoing chemotherapy for cancer in Aberdeen, the coach is anxious and so is his co-owner, Sandeep Chattoo, who has been in constant touch with officials from the government, trying to work out a solution.
Robertson, his wife Kim, and son Mason, who plays for the club, are stuck in Chattoo’s hotel in Srinagar since the enforcement of the nationwide lockdown to contain the COVID-19 pandemic and the suspension of international flights.
Giving them company are the clubs’ other foreign players — skipper Loveday Enyinnaya, Kallum Higginbotham, Aaron Katebe, Bazie Armand, Gnohere Krizo and two members of Robertson’s support staff.
“We have been trying and hoping for them to return home but the chartered flights, which the UK government is arranging, are evacuating those UK nationals stranded in Delhi, Mumbai and Chennai now,” Chattoo said.
“There are no flights from Srinagar and the problem is how do I get them to Delhi. Even by road, they will have to go via Punjab and Haryana and all state borders are sealed at the moment.”
“We will keep trying but for now we can only hope that something works out as soon as possible.”
Chattoo, whose family lives in Jammu, himself decided to stay back with his team.
“How could I have gone back home. They are also like my family and so I am with them.”
Real Kashmir FC were placed fourth on the points table when the I-League was suspended owing to the novel coronavirus outbreak.
Had the situation been normal and the league continued, RKFC had a good chance of toppling second-placed East Bengal and Punjab FC as they were just a point behind them with an extra game.
He was full of praise for his team, especially the coach, who has kept his composure despite upheaval in his personal life.
“He has been so nice even when he knows that the most important thing for him now is to be with his mother. But he understands that we are trying our best.”
Robertson, who joined the club in 2017, has played a key role in its promotion to the top-flight I-League.
Asked how his players are spending their time in confinement, Chattoo said, “While they wish to leave for home as soon as possible, till the time they are here the players are spending some time in the gym, playing video games and we are also interacting among ourselves.”
The novel coronavirus, which has brought all sporting activities to a grinding halt, has so far claimed more than 70 lives while infecting over 3000 people across the country. (PTI)