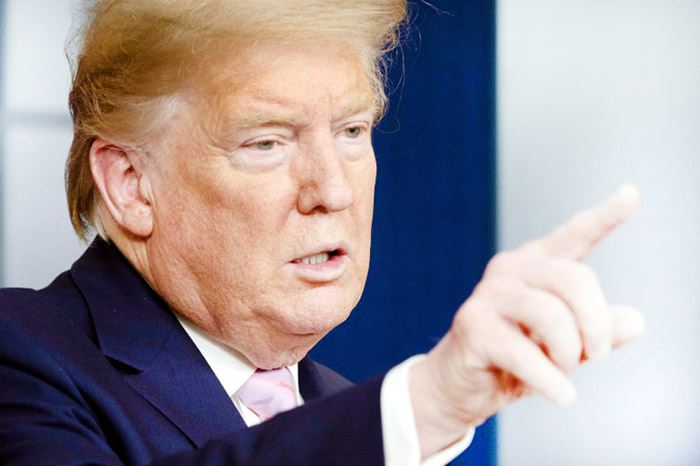 Washington, Apr 5: President Donald Trump said he believed US sports leagues hit by the Coronavirus pandemic would resume “sooner rather than later” but declined to set a timetable for their return.
On a conference call with the commissioners of the major professional sports leagues, Trump told National Football League commissioner Roger Goodell he believed the season would kick off as scheduled in September.
US sports have been upended by the coronavirus, with the NBA, Major League Baseball, Major League Soccer and National Hockey League all halting or suspending their respective seasons last month as the pandemic erupted.
“I want fans back in the arenas…Whenever we’re ready,” Trump told reporters at a White House briefing on Saturday.
“As soon as we can obviously. I can’t tell you a date but I think it’s going to be sooner rather than later.”
Major League Baseball and NBA officials are reportedly studying plans to play games without spectators at neutral venues to minimise the risks of infection associated with crowded arenas.
Trump, however, spoke optimistically of fans eventually being let back into stadiums.
“We’re not going to have separation for the rest of our times on the planet,” Trump said.
“We need it for this period of time. But eventually people are going to be able to occupy those seats next to each other. I’m not committing to it. It would be great if we could.”
The NFL has so far made no plans to alter the start of its 2020-2021 season, with pre-season games usually starting in August.
However California Governor Gavin Newsom was sceptical of the possibility of sports resuming in August or September.
Speaking at his daily briefing, Newsom warned of a possible resurgence in infections if sport returned to soon.
Asked about the possibility of fans heading to stadiums in September, Newsom said: “I’m not anticipating that happening in this state.” “We’ve all seen the headlines in the last couple of days in Asia where they were opening up certain up businesses and now they’re starting to roll back those openings because there’s some spread, a boomerang,” Newsom said.
“One has to be very cautious not to over-promise. I have a lot of friends that work in Major League Baseball and the NFL and basketball who have been asking me. I would move very cautiously.
“I’m not here to second guess anybody, but I am here to say this: our decision on that basis, at least here in the state of California will be determined by the facts, by the health experts and our capacity to bend the curve.”