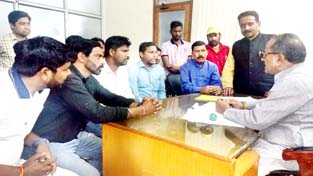 Excelsior Correspondent
JAMMU, Apr 8: A delegation of local youth from Bahu Fort led by senior BJP leader and State incharge of party’s Training Department, Rajeev Charak called on Deputy Chief Minister, Dr Nirmal Singh and discussed various issue including constitution of Shrine Board for Bawe Wali Mata Temple with him.
The delegation apprised Deputy C M about importance of having Shrine Board to create more avenues for pilgrims and to streamline the management.
It also informed that campaign was started in 1997 and got tremendous support from people but unfortunately successive Governments put the demand on backburner.
The delegation also said that a signature campaign for Shrine Board for Bawe Wale Temple was launched, which was very successful.
Dr. Nirmal Singh listened the demand and assured all possible help in near future.
The delegation also called on Speaker Jammu and Kashmir Legislative Assembly, Kavinder Gupta who is also MLA of Gandhi Nagar Constituency and discussed various issues with him.
The issues discussed also including recruitment process for upcoming Cable Car Project.
Rajeev Charak, informed Speaker that previous governments always discriminated with people of Bahu Fort.
“Local youth were neglected in projects like Fish Aquarium, Bagh-e-Bahu or Jammu University. Employment opportunity to local was rejected outrightly,” he informed and demanded recruitment of local youth in upcoming Cable Car Project at Bahu Fort and Mahamaya park.
Kavinder Gupta, was also apprised of dilapidated condition of roads and drains beside shortage of water.
The delegations appealed MLA to initiate development works at the earliest, so that people don’t have to suffer anymore.
The speaker, showed the keen interest to resolve all the issues discussed and informed the delegation that much work has been done regarding all the issues.