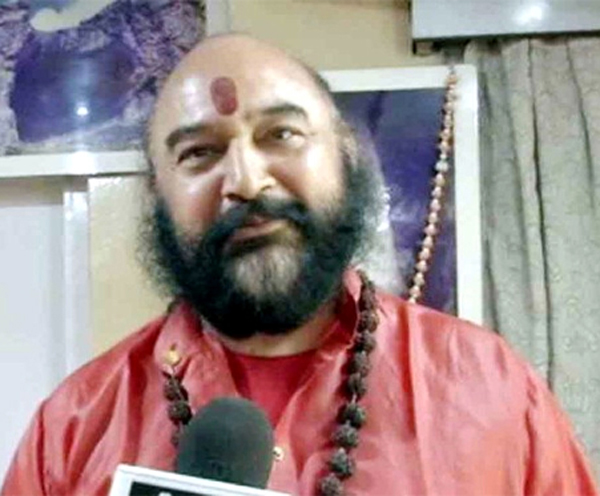 ‘Rituals to continue as per tradition’

JAMMU, June 22: Mahant Deependra Giri, the custodian of the Chhari Mubarak of Shri Amarnath Ji, the holy mace of Lord Shiva, today said the decision to cancel the annual pilgrimage for the second consecutive year was “not pleasant” but an appropriate one, keeping in mind the COVID-19 pandemic and the safety of the pilgrims, NGOs and the staff involved with annual pilgrimage.
“The annual Amarnath pilgrimage has been cancelled this year too like last year. Though the decision is not pleasant, it is appropriate in view of the (COVID) pandemic and for the safety of the pilgrims, NGOs and the staff involved in the yatra,” Mahant Deependra Giri said in a statement issued from Srinagar today. Click here to watch video
Mahant Ji hoped that the countrymen would be fully vaccinated against COVID-19 before the next year’s yatra and the pilgrimage would also resume as normal.
“I hope by this time next year, the citizens of our country will be fully vaccinated and we can have the usual and normal pilgrimage,” he said.
He said those who had applied for the yatra this year and were registered should not feel disappointed over the cancellation of the pilgrimage for second year in a row as they would perform darshan of holy Shivlingam via daily telecast of proceedings from cave shrine.
Mahant Ji said that on Shravan Purnima this year when the holy mace reaches the cave shrine all the Sadhus will hold Samohik prayers to Lord Shiva praying to wipe out this pandemic and he expressed the hope that Shri Amarnath Ji will accept the prayers and we will get rid of the dreaded pandemic.
He said the decision taken by the Board regarding cancellation of this year’s yatra was in the larger interests of pilgrims coming from across the country for darshan of holy cave, the employees and NGOs associated with the annual yatra.
On the performance of rituals, Mahant Ji later told Excelsior that he is positive in this regard as the yatra was cancelled last year too but all the rituals connected with the Chhari Mubarak (holy Mace ) were performed as per the set traditions.
He said that though he has not given the programme regarding performing of annual rituals and taking of holy mace to cave shrine to Government as yet, but he is hopeful of performing the rituals connected with Chhari Mubarak as per the established traditions as was done last year despite the fact that the yatra was cancelled last year too.
Mahant Ji said he expected cooperation from both Government and Shrine Board in this regard so that the tradition is continued.
It may be recalled that the Baltal track to holy cave has been made through for pilgrims besides the Board had also granted permission to langer organisations to set up the langers via Baltal track giving an impression that limited number of pilgrims would be allowed to visit holy cave via Baltal route this year in view of pandemic. However snow clearance from traditional Pahalgam -Chandanwari track was not taken up in hand.
But later the Lt Governor, Manoj Sinha who is the chairman of the Board also announced yesterday that the annual yatra has been cancelled due to COVID Pandemic this year too to save the lives of people but the traditional rituals will be performed at the holy cave as per the past practice, besides the devotees will have online darshan from the cave shrine also.
The decision of the Board was, however, opposed by Shri Amarnath Bababarfani Langer Organisation (SABLO) who showed their total dismay over the decision of the Board.