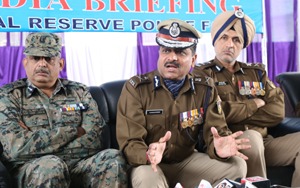 SRINAGAR, Apr 9: The Additional Director General of para-military Central Reserve Police Force (CRPF), VSK Kaumudi, today cautioned people not to disrupt the anti-militancy operations as it can lead to loss of lives or injuries.
Speaking to reporters here at Humhama headquarters of the para-military force on the sidelines of celebrations of Valour day, Kaumudi said: “We caution people not to be responsible for any type of militant support by trying to divert the attention of security forces during anti-militancy operations and help them as they are deployed for the safety of the people”. Click here to watch video
He said that stone pelting can lead to loss of lives or injuries. “The stone pelting during encounters will ultimately lead to loss of limb and life. Recently we have seen the CRPF vehicle was attacked in South Kashmir’s Kokernag area.  Two of the jawans died and the driver got badly injured. It doesn’t do any good”, he added.
The CRPF Additional DG said that if people have any grievances they can use peaceful means of resentment and breaking of law is eligible for punishment. “If you have something to say use social media as it can also be used to voice your resentment.   You should not break law because it makes you eligible for the punishment”, he said.
“So far as the involvement of the locals is concerned many factors are responsible including anxiety, curiosity, and provocation. It has not started today and these things have been happening in the past as well. However,   the attacks on security forces and disruption of operations by stone pelters need to be dealt with”, he added.
Kaumudi  said that some people are provoking stone pelting during operations which is becoming threat for the other people. “There have been certain incidents and instances where certain groups have tried to provoke people and it has also become a kind of threat to others as they are having difficulty in venturing out of their homes.  How many are coming willingly and how many are forced is something that a different agency might investigate. But it’s certainly something which disturbs our anti-militancy operations and at the same time, it disturbs peace, education and the functioning of other agencies which are meant for the welfare of the people.  People have to introspect and think which way are they going”, he said.
The DG said that a section of the protesters are radicalized and it is the responsibility of family to monitor them. “It is all a matter of radicalization in certain cases. But every protestor is not radicalized. There can be youth who are drawn to such kind of things as they are young impressionable minds and it’s the duty of elders to guide them. It’s for the people who have to realize if somebody who is offering heaven to them he has been able to create heaven anywhere. There should be monitoring within the family”, he said.
Kaumudi  sought cooperation from people for maintaining peace in Kashmir. “The situation in Kashmir is not new to the force , the CRPF has dealt such issues earlier as well.  We only need support from the people. People should not listen to wrong advice and provocations.  Whether they will pelt stone or harass people both are illegal.  Stay away from such activities so that peace can be maintained”, he said.
The DG CRPF said that although the force  has used deflectors on pellet guns but once stone pelters duck they are bound to get hit. “We have applied deflectors on all the guns but when protestors duck to pick up stones they are bound to get hit”, he said.
Kaumudi  said that if any one needs counseling the force is ready for help. “If you need any counseling we will help them. Come to us and let us know what you need. We will help people. They can trust CRPF. When someone gets help from CRPF under civic action plan, the people will know the benefit themselves”, he said.
“Every unit has an area of responsibility wherein it takes care of everything including militancy-related issues, convoy movement, yatra or VIP movement. On the ground, we see some anger from people but the majority of them understand that their children need a peaceful environment for their studies.  The other professionals also understand the importance of peace and acknowledge the fact that it is because of peace the tourism and other business activities are possible. Yatras will also come.  It’s for everyone’s sake that peace shall prevail here and we are here to help it”, he said.
The DG offered all type of help to the family of CRPF personnel. The families of the jawans who have laid their lives for the nations will be taken care of. “We will try to provide them employment and if anyone in their families is facing health issues. They should approach us. We will help,” he said.