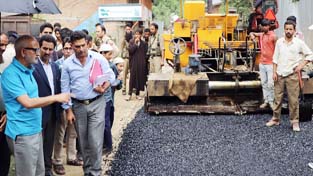 BANDIPORA: Placing Bandipora on the trajectory of economic transformation, Minister for Public Works and Culture, Naeem Akhtar, today announced that connectivity projects worth nearly Rs 100 crores will be taken up under various centrally sponsored schemes during this fiscal in the district.

Accompanied by senior officers of the district administration, the Minister undertook a whirlwind tour of the district today during which he visited close to half dozen villages including Sunderkote, Guroora, Bapora, Sumlar and Arin where he interacted with local residents and sought their feedback on the Government’s developmental policies.

Recalling the glorious past of the district, Akhtar said Bandipora has faced neglect over these years due to which the district has been pushed into backwardness, “Bandipora was a knowledge hub of our valley but it is lagging now among all districts of the country in crucial indicators of development. To provide sustainable livelihood for economic transformation of the district, a multi-crore project for bee-keeping has been sanctioned by Khadi Village and Industries Board, work on which will start soon,” he said.

Akhtar said the State Government under the leadership of Chief Minister Mehbooba Mufti is committed to put Bandipora on the trajectory of economic transformation. He said the Public Works Department is building a vibrant and reliable road network that will open up new vistas for social and economic empowerment of people living in far-flung areas of the district.

“Our commitment is to see Bandipora with a strong network of roads which will connect people and aspirations, and also foster an atmosphere for vibrant economic activity. This year, we are undertaking works worth nearly Rs 100 crore to strengthen the road connectivity in the district which will be expanded next year,” the Public Works Minister said.

While touring different villages, the officers accompanying the Minister said the land for construction of Eklavya School, a tribal residential school for Gujjar and Bakerwal community of Jammu and Kashmir, has been identified and work on the construction of the school will be started soon.

The Minister was also told that the tender for construction of Jawaharlal Navodaya Vidyalaya at Brar village has already been sanctioned and construction work will be started soon, “The twin schools will bring world-class education to the doorsteps of the disadvantaged students which will go a long way in social and economic empowerment of Bandipora,” he said.

Ahktar directed the district officials and officers of the Public Words Department to complete the Safarpora-Ajas Road in Bandipora by the end of September this year. From Ajas onwards to Sunarwani, works worth Rs 23.33 crore have been tendered already and the road is expected to be completed by next year, officials said.

The Minister also visited the Eidgah in Bandipora and discussed arrangement being made by the district administration for holding Eid prayers there. The government has already sanctioned construction of a drain to flush out the stagnant water from the prayer ground and the Minister directed the administration to make preparations for the upcoming Shab-e-Qadr and Eid celebrations in the district.

Giving out details, the officers of the Public Works Department said that developmental works worth Rs 58 crore under Central Road Fund will be taken up in Bandipora district including Ajas-Sonarwani Road for Rs 23.33 crore, Bandipora-Athwatu-Sonarwani Road for Rs 14.74 crore, Safapora-Ajas Road worth Rs 9 crore, Arin-Bapora Bridge worth Rs 6 crore and Nadihal-Arin Road worth Rs 5 crore.

Under NABARD funding, the Public Works Department will take up projects worth nearly Rs 11 crore including Rs 3.97 crore for Argam-Brar Chetibanday, Rs 2.58 crore for Kaloosa Watrina, Rs 2.38 crore for Kehnusa Malangam and Rs 2 crore for Ajas-Bazipora,

The officers said that under Pradhan Mantri Gram Sadak Yojna, 14 schemes are scheduled for completion this year incluiding 23 km worth Rs 27 crore. Officers said connectivity projects worth more than Rs 96 crore will be taken up in the district during this financial year.