JAMMU, Jan 1: Former Minister and senior Congress leader Raman Bhalla has asked the party cadre to gear up their activities in view of forth-coming elections in the State.
Addressing public meeting at Chatha in Gandhi Nagar constituency today, Bhalla asked the people to strengthen the frontal organizations and departments of the party to gear up for the future elections which are quite near and asked them to strengthen their respective frontal organizations and cells at booth, block and district level. Bhalla said Congress has always provided a vibrant platform to youth to play their designated role in the State polity and help in shaping its politico-economic destiny.
Former Minister said that the results of recently held Assembly elections in five states shows that Congress is the most acceptable secular force in the country. The need of the hour is to reach to the people in every nook and corner to make aware the common man, especially young generation about the programmes and policies of Congress party. Bhalla said that there is great opportunity for the Congress party to emerge stronger in view of the total betrayal and failure of BJP to fulfil the commitments and come up to the expectations of the people of this State.
Bhalla said that Congress is well prepared for Assembly elections and expressed hope that Congress will emerge victorious as cheated and betrayed people of State by previous PDP-BJP Govt are very much clear to give mandate to Congress as they have realized by now that PDP-BJP Coalition Government miserably failed to live up to the expectations of the people. There is a strong resentment among the people against previous government as it has not fulfilled its promises made at the time of Assembly elections. “People are realizing the futility of electing a government that was not only insensitive towards their problems but also responsible in adding to these on every front”, he said.
Bhalla said Congress is the only destination for those who want peace to sustain and development to remain focused agenda of the Government in the State. He said the initiatives taken in this regard by Congress Governments especially the previous one has been negated by the previous anti-people dispensation. Criticizing BJP he said that agenda of alliance was nothing but an eye wash for the people and added BJP has taken Jammu and Ladakh for granted and has failed to represent the aspirations of the people. 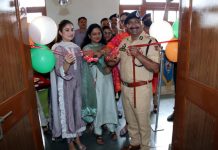