Srinagar Sept 22 A civilian was allegedly injured in the army firing in Azad Gunj area of northern district of Baramulla.
A Police official said that a civilian sustained bullet injury in his legs at Azad Gunj area of Baramulla. “Different versions are coming, we are ascertaining the facts as to what exactly happened,” police said, adding that the injured civilian is stable.
He said that the case has been registered and investigations taken up.
The injured civilian has been identified as Mohsin Ahmed of Iqbal Colony , Baramulla, an auto-driver by profession.
A Police spokesman said here that this afternoon Baramulla Police received information that some gunshots were heard from Azad Gunj Chowk area of Baramulla and a civilian identified as Mohsin Soleh resident of Arampora has been hit and injured.
“Accordingly, a case vide FIR No. 211/2021 under relevant sections of law was registered at PS Baramulla and investigation was initiated”, spokesman said.
“The injured was shifted to hospital with bullet injuries in his legs where his condition is stated to be stable. In this connection, statements of eye witnesses, family and other bystanders acquainted with facts and cicrumstances are being recorded besides, evidences including CCTV footage etc is also being collected and analyzed”, he said.
“Pertinently, later on concerned Army unit also reported about the said incident in concerned police station as an attempt of weapon snatching by the said injured person, who had a history as an OGW”, the spokesman added.
Police said that the investigation into the matter is going on and the full circumstances leading to the incident from all the possible angles is being ascertained. 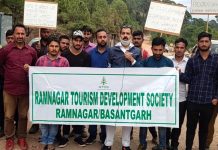