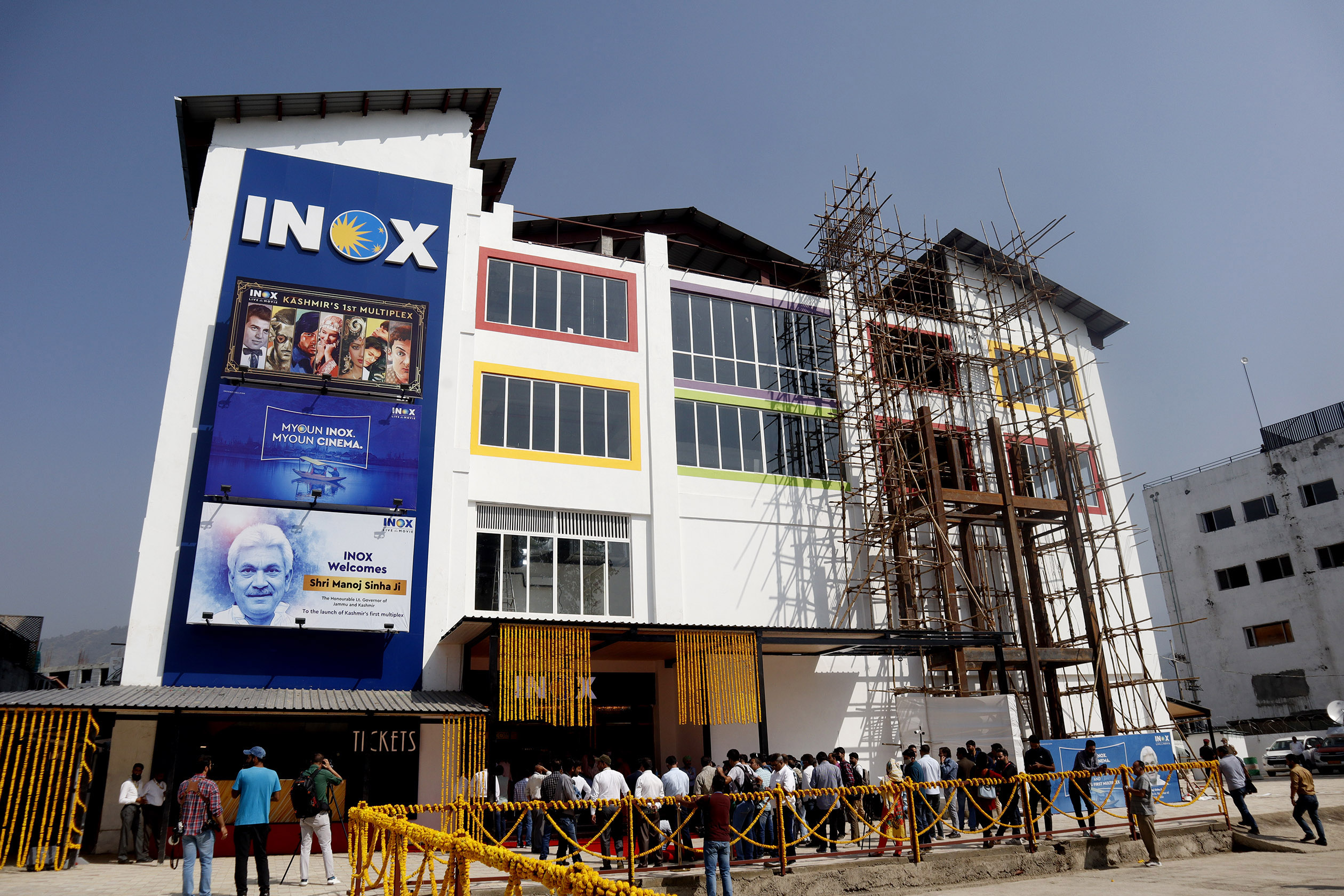 B L Saraf
After a gap of 32 years movie goers in Kashmir will, now, have a place for a weekend chill out and a source of psychological cum physical rejuvenation, enabling them to confront upcoming week’s challenges that exist both on the domestic and professional fronts. They would be the routine in good old days. On 20th September, Lieutenant Governor Manoj Sinha sounded a note of truth while inaugurating Kashmir’s first Multiplex Cinema in Srinagar . He said “There used to be a time when people in large numbers would come to watch movies along with friends and families. Cinemas would provide them opportunities to think big and dream big besides entertaining them.” LG announced that in Pulwam and Shopian districts two multipurpose cinema halls are coming up shortly and that Government is planning to have such halls across Kashmir.
Earlier, in 1996 CM Farooq Abdullah did manage to reopen Broadway and Neelam cinema houses but due to the lack of patronage both put shutters down, soon. Then, in 1999 attempt to bring Regal cinema to the life failed as the terrorists put a scare down the spine of potential cinema goers.
At the time of inauguration the LG recalled movie “Janwar “, a Shammi Kapoor starrer – the first film to be screened in Broadway cinema Hall (predecessor to the now inaugurated INOX Multiplex) and revealed an interesting anecdote about Kapoor’s love for Kashmir ” Such was the love of Kapoor for Kashmir that he had asked his family members to perform his last rites in Dal lake.” It could be so: because, it were the films shot on locations in the Kashmir Valley- such as “Junglee”, ” Janwar ” and “Kashmir Ki Kali ” that brought fame and a roaring success at the Box Office to him .In fact Kashmir is the place where quite a number of female artistes like Saira Banoo , Rajshree and Sharmila Tagore, who worked opposite to Shammi Kapoor in these films, were successfully launched to the stardom.
We may recall that in year 2017, Sharmila Tagore was in Kashmir. She met Governor at Raj Bhawan and reminisced about the good old days of her cinematic work she did in Kashmir that brought laurels to her. Her visit regenerated memories of that beautiful Kashmir spring, in year 1962 , when she had come to Kashmir, for the first time , for shooting of film , Kashmir Ki Kali – her debut movie in Hindi language. That brought her, Shami Kapoor and Pran to Shopian for filming a very important song and dance sequence , atop a nearby hillock .The roads that wound around the hillock had the honour of having immortalized movie Kashmir Ki Kali. Alas! Later on these roads saw blood spilled all over thanks to the bloody games terrorists played with the innocent human lives, besmirching the pride they had in carrying Bollywood to the great heights .
Till yesterday, Kashmir defined itself in a very positive manner. Unfortunately, the positivity in its definition has vanished, only to be replaced by a despair, gloom and sorrow. We pray the 20th September event brings back hope and cheer. If the L G feels that the films screened in Srinagar should ” provide Kashmiris an opportunity to think big and dream big ” then more than setting up movie halls requires to be done .
What adds to the Kashmir tragedy is the complete vacuum in civilized politics. Mainstream politics is absent- if at times it shows up it is only to give a fragmented look. Non-state actors have a field day. Fundamental changes are required. Finding a way out in bits and pieces put together won’t work. Security forces foot print has to be reduced in size across the State. Local dialogue must begin; Government has to do the job of governance.
One has to keep in mind that the Cinema will give momentary relief to the tense nerves. In Kashmir we need a durable balm to heal the bruised psyche and ruffled emotions which theater alone can’t provide. A deeper diagnosis is required to cure the malaise caused by the three decades old turbulence . Cosmetic treatment won’t do. Local sensitivities have to be taken care of.
The opening of Cinema Halls may bring Bollywood to the Valley . Remember, both have undergone a tectonic change since they have had the last interaction with each other. In olden days both had a pronounced syncretic look and a demeanor : both have suffered on that front.
Kashmir has become a one dimensional society with very little room for the ‘ other ‘. Bollywood, on the other side, is divided into “My heroes My script ” and Your Heroes Your script ” dependent on the ideology the artistes espouse just to suit the ruling regime of the period . They carried loads of soft power. May the anticipated frequent to and fro travel may help them regain the olden grace and poise which defined them and made both known across borders.
The civil society- if there is one in Kashmir – will have to act to ensure that no innocent life is sniffed out. And when we talk of a local dialogue the Government, apart from reigning in its forces, must take this civil society on board for the restoration of semblance of peace and order in the turbulent area. Every one must put weight behind the civil society and help our home place regain the past. Kashmir must invoke its inherent defining qualities. Cinema will then become truly enjoyable and serve the purpose the LG has visualized for the local audience – “of thinking big and dreaming high.”
(The author is former Principal District & Session Judge)