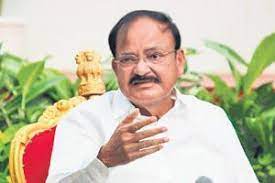 NEW DELHI, Jan 23: Vice President M Venkaiah Naidu on Sunday paid tributes to Subhash Chandra Bose on his 125th birth anniversary, saying he personified selfless devotion to the cause of the motherland.
He also lauded the central government’s decision to install a grand statue of Bose at India Gate.
“We commemorate this day as Parakram Divas to honour Netaji’s indomitable courage and selfless service to the nation. The nation is indebted to the iconic leader for his monumental role in the freedom struggle,” the Vice President Secretariat tweeted, quoting Naidu.
The vice president also paid floral tributes to Bose in Hyderabad.
“He personified selfless devotion to the cause of motherland. The entire nation fondly remembers and salutes the legendary leader on Parakram Divas today,” he said.
The statue is a fitting tribute and a mark of nation’s indebtedness to the iconic freedom fighter, he said.
“I also appreciate the decision to start Republic Day celebrations a day earlier this year in honour of the great nationalist,” he said. (PTI)