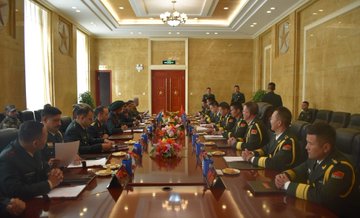 NATHULA PASS: A meeting between senior military officials of India and China on the latter’s National Day was held “with a lot of warmth” at Nathula Pass in Sikkim on Tuesday, an Indian Army official said.

Nathula Garrison Commander A S Dadwal led the delegation of the Indian Army officers to the Chinese side of the border at Nathula pass around 10 am. The meeting ended around 1.30 pm, a senior Army official said. (AGENCIES)

Restoration of Jammu and Kashmir’s statehood must to rebuild trust, says Farooq Abdullah