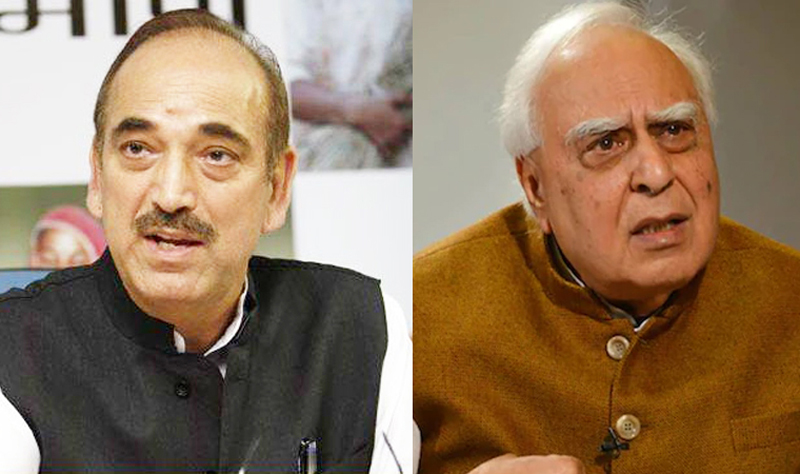 NEW DELHI, Sept 29: Beset by troubles on multiple fronts within, the Congress faces the danger of imploding with party veterans Ghulam Nabi Azad and Kapil Sibal today sharply questioning the decision-making process, saying there are “no monopolies”, and demanded convening an urgent meeting of the CWC for a “dialogue”.
A senior member of the ‘Group of 23’ who had written to Congress President Sonia Gandhi seeking an organisational overhaul, Sibal said the grouping is “not a Jee Huzur 23”, and will continue to put forth their views and repeat their demands. He also attacked the Congress leadership, wondering who in the party was taking decisions in the absence of a full-time president.
Amid a fresh bout of defections after Congress leader and former Goa Chief Minister Luizinho Faleiro joined West Bengal’s ruling TMC today, its former Punjab Chief Minister Amarinder Singh met Home Minister Amit Shah here triggering speculation over his future political plans.
The Punjab unit of the Congress is in turmoil after Amarinder Singh was removed as Chief Minister and its chief Navjot Singh Sidhu resigned from his post ahead of the crucial Assembly elections in the State early next year. Factionalism in Punjab Congress has come to the fore over recent appointments of the new cabinet and other top officials.
The Congress has seen a spate of defections recently with Faleiro and its former MPs Abhijeet Mukherjee, son of former President Pranab Mukherjee, and Sushmita Dev defecting to the TMC. A senior Congress leader from Kerala V M Sudheeran has also quit from all the AICC positions.
Some senior leaders from the party including Jyotiraditya Scindia and Jitin Prasada have left the party and joined the BJP and are now both Ministers in the BJP’s Central and UP Governments.
The internal feud within the party came to the fore again with Azad and Sibal demanded convening of a meeting of the Congress Working Committee (CWC),its highest policy making body, to discuss the party affairs.
Azad wrote to party chief Sonia Gandhi on the current state of affairs where the party is facing crisis in some states with a number of its senior leaders quitting.
Amid the turmoil in Congress in states like Punjab and defections, Sibal demanded holding elections to the post of the Congress president, the CWC and the central election committee.
Expressing anguish over the developments in the party, he said all such issues need to be discussed at a party platform.
“In our party at the moment there is no president. So we don’t know who is taking these decisions. We know and yet we don’t know,” Sibal said.
“One of my senior colleagues has written to the Congress president to immediately convene a CWC. So that at least some things that we can’t speak publicly, we can have a dialogue in the CWC as to why we are in this state,” he added.
Attacking the party leadership, Sibal said there is no monopoly in the power structure of any country or political party and quoted Mahatma Gandhi to say that no school of thought can claim a monopoly of right judgment and we are all liable to err and are often obliged to revise our judgements.
“So, listen to our point of view. If you don’t accept it, fine, but at least listen. We respect your point of view, but have the space to respect ours. Allow us that dialogue. There are no monopolies. No monopolies should be created in the power structures of any country or a party,” Sibal said.
He said it is ironic that those who were considered their closest aides have left them and those who they thought were not close to them are still with them.
Congress general secretary Ajay Maken hit back at Sibal, saying such leaders should not denigrate the organisation and its leadership that gave them political identity.
Congress workers from Chandni Chowk, the constituency in Delhi that Sibal represented in Lok Sabha in the past, also protested outside his residence holding placards with “Get well soon” message. They also raised slogans against Sibal alleging that he never bothered to ask about the people who voted for him.
“My appeal to Mr Sibal and others like him is that they should not denigrate the organisation which has given them political identity by rushing to the media every then and now,” Maken said.
“Such remarks by leaders like Sibal, who have got everything from the organisation and the leadership, demoralise the party cadres and ordinary workers who continue to stand with the Congress ideology and are fighting the fundamental and fascist forces on the streets,” he said.
After joining the TMC, Faleiro said in Kolkata, “I am a Congressman. I have same ideology and principles. Today when I am joining the TMC, my dream is to bring together this Congress family. I should try to ensure that the Congress family is again united. My main aim is to defeat the BJP.”
Abhijit Banerjee has also hit out at the party leadership saying, “There is a lot of difference in the working style of Congress then under Sonia Gandhi Ji and now”.
“These days, with three power centres at 24 Akbar Road, it’s difficult to identify the original pillar and in the melee, genuine workers are sidelined,” he said.
He also said that “it is high time, the Congress should introspect why they are becoming or had already become “0” in most of the States. May be that may help.”
Breaking his silence a day after abruptly resigning as the chief of the party unit in Punjab, Sidhu raised questions over the appointments of the director general of police, advocate general and “tainted” leaders.
Sidhu said he was ready to make “any sacrifice” but would always stand by his principles, after his resignation plunged the Congress into a fresh crisis. (PTI)

Amarinder meets Shah
Former Punjab Chief Minister Amarinder Singh met Union Home Minister Amit Shah at his residence here today, triggering speculation over his future plans ahead of the Assembly polls in the State.
After his meeting that lasted for about 45 minutes, Singh tweeted “met Union Home Minister Amit Shah ji in Delhi. Discussed the prolonged farmers’ agitation against #FarmLaws & urged him to resolve the crisis urgently with the repeal of the laws & guarantee MSP, besides supporting Punjab in crop diversification. #NoFarmersNoFood.”
However, the politically significant meeting, which came days after Singh resigned as Punjab Chief Minister, raised speculation over his future plans ahead of the Assembly polls with some political analysts viewing it as an indication that Singh may be seeking the support of the Bharatiya Janata Party (BJP).
Sources said the former Punjab Chief Minister is learnt to have also discussed the internal security situation in Punjab with Shah.
Singh has been claiming that instability in Punjab may give Pakistan a handle to create disturbance in the border State.
He has also accused Congress leader Navjot Singh Sidhu of being “close to (Pakistani Prime Minister) Imran Khan” and alleged that he is “dangerous” for the border State.
Singh arrived in the national capital on Tuesday.
There are reports that Amarinder may call on Prime Minister Narendra Modi, but there is no official confirmation.
According to the sources, the veteran Congress leader may also meet some of the ‘Group of 23’ leaders, including Kapil Sibal and Ghulam Nabi Azad.
Singh’s meeting with Shah assumes significance as the Congress leader has not divulged his future plans but had asserted that he has not quit politics and would fight till the end.
Singh has also said that there were several options before him.
He had also launched a scathing attack on his bete noire, Sidhu, who was appointed as the president of the Punjab unit of the Congress.
Sidhu quit as the Punjab Congress chief on Tuesday. (PTI)