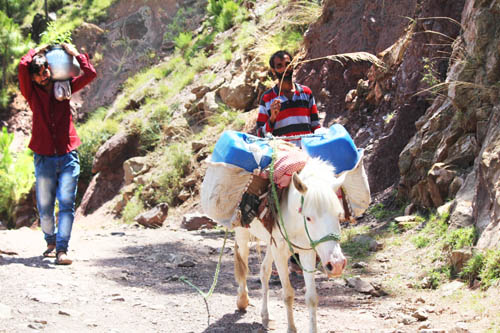 Excelsior Correspondent
POONCH, June 22: Salani village in Krishna Ghati area of Mendhar Sub Division, which remained in lime light due to martyrdom of Army soldier Aurangzeb, is facing acute shortage of drinking water during these hot summer days.
Such is the position of water supply in the area, that the old water supply scheme has gone defunct. Most of the water pipes are broken and the local water sources have also gone dry. The people are forced to purchase water brought by horse/pony wallas from the nallah after covering three to four kilometer distance. The public is made to spend huge money every day on drinking water. Those who can not afford, move their self to fetch water on foot and spend at least half day in bringing just one container/ pot of water.
Even during the visit of Union Defence Minister, Nirmala Sitharaman, three days ago herself inquired about the water containers being carried to the village on the backs of horses and she was surprised to listen the reply of the locals. The entire population of this KG village, is drinking unsafe water from the Nallah and the concerned PHE Department has failed to ensure water supply to this entire belt.
A senior officer in the administration when contacted claimed that not only Salani, but most of the villages in Mendhar Sub Division are facing sever water crisis these hot summer days. Many water sources have gone dry and pipes at many places are lying broken. The hand pumps installed at many places have also gone defunct. The public is dependent on old traditional water sources. He said that more water tankers are needed to cover the larger area by providing alternate supply of water.

Plan of Rs. 167.25 crore approved for Samagra Shiksha in Ladakh