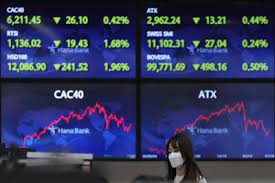 Bangkok, Aug 11: Shares advanced on Thursday in Asia after benchmarks closed at three-month highs on Wall Street as investors cheered a report showing inflation cooled more than expected in July.
Hong Kong, Shanghai and Seoul saw gains of more than 1 per cent. Tokyo was closed for a holiday. US futures edged higher, while oil prices slipped.
The Government said on Wednesday that consumer inflation jumped 8.5 per cent in July from a year earlier. But that was down from June’s four-decade high of 9.1 per cent.
The S and P 500 surged 2.1 per cent on expectations that slower inflation will mean the Federal Reserve may moderate its interest rates hikes.
Technology stocks, cryptocurrencies and other investments that have been among the year’s biggest losers due to the Fed’s aggressive rate hikes led the way.
Asian markets also took heart. Hong Kong’s Hang Seng index added 2.2 per cent to 20,044.76, while the Shanghai Composite index gained 1.6 per cent, to 3,281.09.
The Kospi in Seoul rose 1.4 per cent to 2,515.45. In Australia, the S and P/ASX 200 climbed 0.9 per cent to 7,057.30. Taiwan’s Taiex was up 1.7 per cent.
In Thailand, the SET picked up 0.4 per cent after the country’s central bank raised its benchmark interest rate by 0.25 percentage points to 0.75 per cent a day earlier.
The Southeast Asian country’s economy has been hard hit by the pandemic, which ravaged its all-important tourism sector.
Still, experts warned the war against inflation is not over.
“It’s of course great to see the latest inflation print come lower-than-expected, but first, one data point doesn’t make a trend, and we had a similar surprise earlier this year, but then inflation spiked to fresh multi-decade highs the following month,” Ipek Ozkardeskaya of Swissquote Bank said in a report.
She noted that softer energy prices were the main factor tempering inflation, while prices for food, housing and wages pushed higher.
On Wall Street, the S and P 500 rose 87.77 points on Wednesday to 4,210.24, hitting its highest levels since early May. It is now nearly 15 per cent above its mid-June low.
The Nasdaq composite, whose many high-growth and expensive-looking stocks have been particularly vulnerable to interest rates, jumped 2.9 per cent to 12,854.80. It’s up more than 20 per cent from June.
The Dow Jones Industrial Average rose 1.6 per cent to 33,309.51.
Technology stocks, cryptocurrencies and other of the year’s hardest-hit investments were some of the day’s biggest winners. Bitcoin rose 2.2 per cent to just under USD 24,000.
The inflation data encouraged traders to scale back bets for how much the Fed will raise interest rates at its next meeting.
Interest rates help set where prices go across financial markets and higher rates tend to pull down prices for everything from stocks to commodities to crypto.
Other reports this week will show how inflation is doing at the wholesale level and whether US households are still ratcheting down their expectations for coming inflation, an influential data point for Fed officials.
Recession worries have built as the highest inflation in 40 years squeezes households and corporations around the world.
Wall Street is closely watching to see if the Fed can succeed in hitting the brakes on the economy and cooling inflation without veering into a recession.
The Federal Reserve will get a few more highly anticipated reports before its next announcement on interest rates, on September 21.
They could also alter its stance. Those include data on hiring trends across the economy, due September 2, and the next update on consumer inflation, coming on September 13.
In other trading, US benchmark crude oil shed 9 cents to USD 91.84 per barrel in electronic trading on the New York Mercantile Exchange. It gained USD 1.43 to USD 91.93 on Wednesday.
Brent crude, the basis for international pricing, lost 5 cents to USD 97.35.
The US dollar rose to 133.03 Japanese yen from 132.93 yen late on Wednesday. The euro slipped to USD 1.0293 from USD 1.0300. (AP)