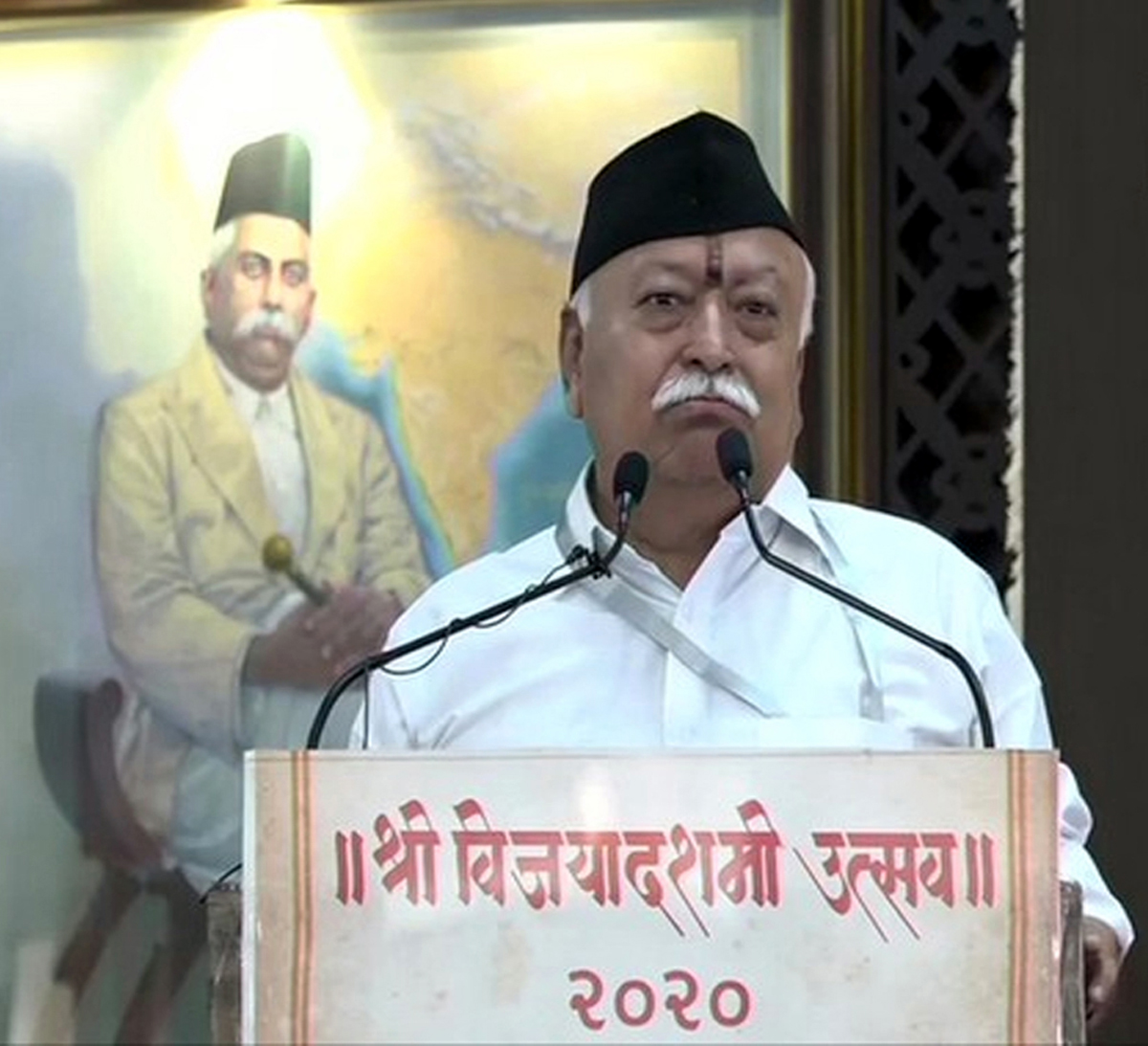 ‘India needs to be more powerful than China’
Excelsior Correspondent
JAMMU, Oct 25: Rashtriya Swayamsevak Sangh (RSS) chief Mohan Bhagwat today said Article 370 which granted special status to Jammu and Kashmir has been abrogated and the country has accepted the Supreme Court verdict on Ram temple with patience and understanding.
He said India needs to be more powerful than China in terms of military preparedness, adding the world is aware of that country’s expansionist designs.
The RSS had strongly supported Narendra Modi Government’s decisions to abrogate Article 370 of the Constitution of India which granted special status to Jammu and Kashmir and was annulled on August 5, 2019.
Speaking at the Sangh’s annual Vijayadashami rally, which this time was limited to an indoor event attended by 50 ‘Swayamsevaks’ due to COVID-19 guidelines; Bhagwat said India needs to be militarily better prepared against China.
Many countries are now standing up to China, he said.
Claiming that China was shocked at India’s response to its intrusion, Bhagwat said, “Our defence forces, Government and people responded sharply to China’s efforts to encroach on our territories.”
“We don’t know how it will react. So the way forward is to be alert and prepared. We should be more powerful than China in terms of military preparedness, economic conditions, international relations and also relations with neighbouring countries,” he said.
The Government should forge an alliance against China with immediate neighbours like Nepal, Sri Lanka and others, he said. “India needs to grow bigger in power and scope than China,” he added.
“China encroached on our borders amid the pandemic,” he said, adding the world knows the expansionist nature of that country. He cited Taiwan and Vietnam as examples of the Chinese expansionist designs.
“We intend to be friendly with all. This is our nature. But mistaking our benevolence for weakness and attempts to disintegrate or weaken us by sheer brute force is unacceptable. Our detractors must know this by now,” he said.
Bhagwat said India is a Hindu Rashtra and Hindutva is the essence of the country’s selfhood.
“When the RSS says Hindustan is a Hindu Rashtra, it does not have any political or power-centered concept in its mind,” Bhagwat said.
He said the term Hindutva has been distorted by appending a ritualistic connotation to it.
The Sangh believes the term is applicable to all 1.3 billion people in the country who call themselves the sons and daughters of Bharatvarsh…And who are proud of the heritage of their ancestors, he said.
On the Citizenship (Amendment) Act (CAA), Bhagwat said it is not against any particular religious community, but “some people misled our Muslim brothers” claiming it was aimed at restricting their population.
“There was opposition to CAA claiming it was being used to check the Muslim population in the country. In fact, no Indian citizen was threatened due to CAA,” he said.
Before the issue could be discussed further, the focus shifted to Coronavirus, which overshadowed all other topics, he added.
“We need not fear Coronavirus, but should be alert and cautious. We cannot stop living. Coronavirus is spreading but fatalities are less. Due to the pandemic, we have started learning the importance of hygiene, cleanliness, environment, family values all over again,” he said.
“Coronavirus has given rise to challenges of unemployment. Many lost jobs and labourers are now returning to cities. But the jobs may not be there. The challenge is to create employment opportunities in different places,” he said.
Bhagwat said before the pandemic, several issues which were in the public discourse took a backseat.