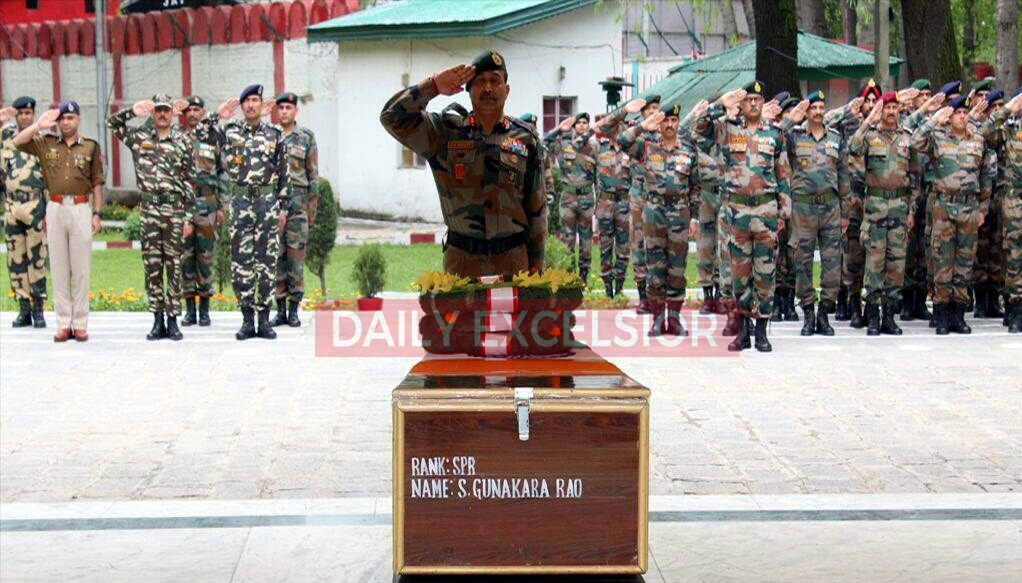 SRINAGAR: Army on Wednesday paid floral tribute to a soldier, who was martyred in an encounter with militants in south Kashmir district of Kulgam.
Defence Ministry spokesperson Colonel Rajesh Kalia here on Wednesday evening said that the Army paid a befitting tribute with full military honours to the martyred soldier, Sepoy Sada Gunakara Rao, who attained martyrdom during counter insurgency operations on Wednesday at Khudwani in Kulgam.
In a solemn ceremony at Badami Bagh Cantonment, he said Lt Gen A K Bhatt, Chinar Corps Commander and all ranks, paid homage to the martyr on behalf of a proud nation.
“In a show of solidarity, representatives from other security agencies also joined in paying their last respects to the martyr,” he said. Col Kalia said Sepoy Rao sustained bullet injuries during the fierce operation in Mugdam Khudwani of Kulgam district, adding he was provided immediate first aid and evacuated to 92 Base Hospital, where he succumbed.
“Sepoy Rao was 24 years in age and had joined the Army in 2012. He belonged to Village Atisurikaviti of Srikakulam district in Andhra Pradesh and is survived by his parents,” he said.
He said the mortal remains of the martyr were flown for last rites to his native place, where he would be laid to rest with full military honours.
In this hour of grief, the defence spokesperson said the Army stands in solidarity with the bereaved family of the martyr and remains committed to their dignity and well being. (AGENCIES)