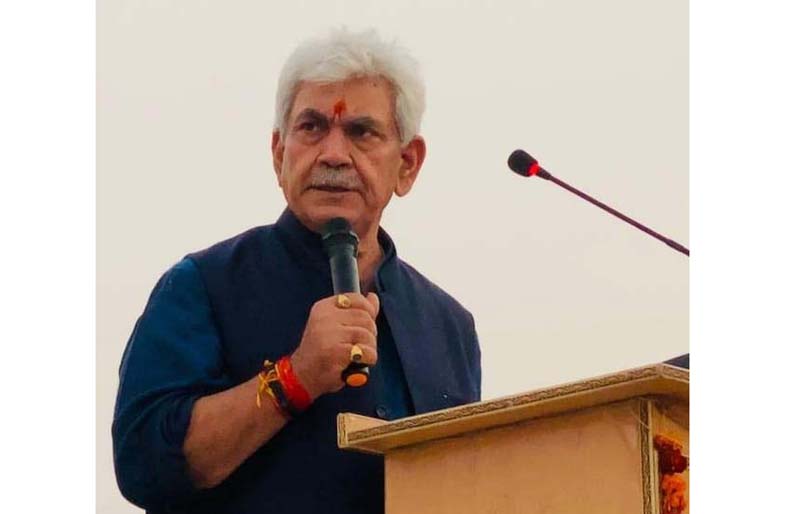 ‘Stone pelting a thing of past’

JAMMU, Dec 24: Lt Governor Manoj Sinha today said that abrogation of Articles 370 and 35-A has not only extended all the Constitutional rights to people of Jammu Kashmir and Ladakh but also chartered a new era of development in both the Union Territories.
“We have also succeeded to demolish the ecosystem of terrorism and today stone pelting has become a thing of past,” he said while addressing a function of Uthan Foundation Trust at Ghazipur in Uttar Pradesh today.
Alleging that there was a long list of misdeeds in Jammu and Kashmir under the garb of Article 370, Sinha asserted that his Government was committed to end monopoly of selected elite people by ensuring development of commoners, particularly poor and weaker sections of society who were neglected for many years.
“In J&K we have charted a new development path after August 2019. For decades, infrastructure was in tatters despite huge amount of money sent by the Centre. The non-development agenda of seven decades in J&K mired the UT in a low growth syndrome. Under the guidance of Prime Minister Narendra Modi, J&K is witnessing a new dawn. Tribals are getting land rights, 11,000 Government jobs have been provided within record time with complete transparency and major steps have been taken to ensure the empowerment of women, marginalized and weaker groups,” Lt Governor said.
” Even today, projects pending since 1980 are being completed. Earlier, 2000 km of road was built, now 5000 km of road is being built. We have completed record 21,943 projects within a year. In Jammu and Kashmir, only 3500 MW of electricity was generated in 72 years, now we are initiating projects to generate double the power in just 5 years. Under Pradhan Mantri Awas Yojana, more than 24,000 houses have been completed in less than two years, whereas 3,500 houses were built in Jammu and Kashmir till March 2018. Even before 2022, the income of farmers has doubled in J&K,” the Lt Governor said.
Lauding Prime Minister Narendra Modi for his commitment towards upliftment of poor and downtrodden besides strengthening security of the country, Lt Governor Manoj Sinha drew attention towards the enhanced budget allocation for border road infrastructure, which has been increased from Rs 23,000 crores in 2014 to 44,600 crores in 2020.
Highlighting other welfare measures and schemes of the Modi Government, Sinha said that after 2014, country ushered in a growth process that is inclusive, caring, and equitable to all sections of society.
“The development march in the last seven and half years is not confined to a few but of all. Under the leadership of Prime Minister Narendra Modi, the country is witnessing a growth process that is inclusive, equitable. Unprecedented steps have been taken to develop infrastructure, revive manufacturing and agriculture, and every step has a single objective- accelerated and equitable growth,” he said.
Sinha claimed that Modi Government has economically and socially empowered marginalised sections that were neglected for decades. Policies of ‘Make in India’, ‘Atma Nirbhar Bharat’ and concerted effort to make the country an economic superpower have ensured that India stands tall at the global stage, he added.
The Lt Governor, while informing about the future endeavors of the Government, said that emphasis is being given on developing more connectivity, new highways, new waterways, new airways. Over Rs 110 lakh crore will be invested in the next five years on modern infrastructure, he added.
Members of Utthan Foundation Trust and people from all walks of life were present on the occasion.
During the visit, Manoj Sinha also addressed gathering at the launch of Kinwar Smriti Stambh, Ghazipur and highlighted the importance of moral values for upliftment of the individual as well as the whole society.