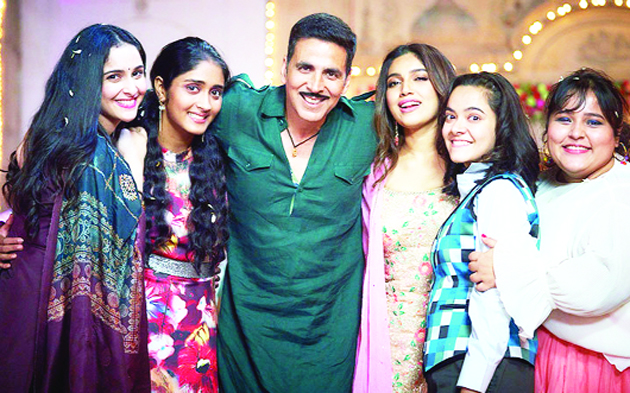 RAKSHA BANDHAN is the story of a brother and his four sisters. Kedarnath (Akshay Kumar) runs Prem Lata Chaat Bhandar, a chaat shop in Chandni Chowk, Delhi. He has four younger sisters – Gayatri (Sadia Khateeb), Saraswati (Sahejmeen Kaur), Laxmi (Smrithi Srikanth) and Durga (Deepika Khanna). Kedarnath’s mother died when all five siblings were very young. She had made him promise that he’ll get his sisters married and only then will he tie the knot. Kedarnath is in love with Sapna (Bhumi Pednekar), his neighbour, since childhood. She is desperate to marry him, but he asks her to wait till he can get his sisters married and arrange for their dowry. Sapna’s father Hari Shankar (Neeraj Sood), however, is not ready to wait as he feels that to have an unwed daughter at home, especially when she’s of marriageable age, is not acceptable. He gives Kedarnath six months’ notice to get all his four sisters married and then tie the knot with Sapna. If he fails to do so, he’ll fix Sapna’s marriage elsewhere. A desperate Kedarnath approaches Shanoo ji (Seema Pahwa), an expert marriage planner. She asks him to pay Rs. 18 lakhs for the marriage of Gayatri, which will cover her fees and also the sister’s dowry expenses. Kedarnath mortgages his shop to raise money. Gayatri’s marriage is fixed. Meanwhile, Hari Prasad runs out of patience and starts looking for a suitable match for Sapna. On the other hand, Kedarnath is now worried about how he’ll raise funds for the marriage of his other three sisters. What happens next forms the rest of the film.
Himanshu Sharma and Kanika Dhillon’s story seems a bit outdated as it reminds one of the social films of the yesteryears. However, one can’t deny that dowry is a burning issue even today. As a result, it comes across as relatable and has the potential to touch viewers’ hearts. Himanshu Sharma and Kanika Dhillon’s screenplay is engaging. A lot takes place in the film and the writers ensure that the viewers get their dose of humour and emotions in every sequence. Sadly, there are a few loose ends to be tied and the writers should have done something about it. Himanshu Sharma and Kanika Dhillon’s dialogues enhance the comic quotient. However, it gets quite acidic in a crucial scene in the second half.
Aanand L Rai’s direction is supreme. He once again brings alive the flavour of the real India on the screen. The character of Kedarnath will win audiences’ hearts, especially how far he goes for the sake of his sisters and more so when he has eye-opening moments in the second half of the film. What’s also praiseworthy is that he packs in so much in the film despite it being just 110 minutes long. On the flipside, a few funny scenes fall flat. The first half is too loud and to see Chandni Chowk residents always fighting and beating each other gets too much after a point. A scene that makes for an awkward watch is when Shanoo tells Kedarnath that she has fixed Gayatri’s marriage. Kedarnath, shockingly, doesn’t even ask about the match, his profession, location etc. He starts celebrating instead! This looks weirder in the second half when he claims that he won’t let his sisters marry any tom, dick and harry and that he’d like to know about them first.
RAKSHA BANDHAN starts on a funny note, showing Kedarnath feeding gol gappas to pregnant customers. The scenes at this point are funny as the makers talk about male children, dowry etc. However, it also hits you how these evils have been normalized in society. Kedarnath beating up eve teasers and then making a public announcement partly succeeds in entertaining. However, the scene where the sisters stop an arranged marriage meeting in Sapna’s house is hilarious. The other remarkable scene in the first half is when Kedarnath stops an anti-dowry activist from spreading her message. The intermission point is emotional. The twist in the tale is the best part of the film and is sure to make eyes moist. The film ends on a progressive note.
Akshay Kumar is in superb form. He’s played the part with aplomb and shines in the emotional scenes. He is in a much better zone here than in his last film, SAMRAT PRITHVIRAJ [2022]. Bhumi Pednekar also puts her best foot forward and tries to contribute to the humour and emotional quotient. However, one wished her character had a little more depth and details were provided about her profession instead of her being shown just as the hero’s lover. Neeraj Sood is dependable. Seema Pahwa is great and sadly, her character disappears after a point. Sahil Mehta (Gaffar) is lovely. Abhilash Thapliyal (Swapnil) is okay. Finally, speaking of the sisters, Sadia Khateeb leaves the maximum impact and looks quite stunning. Smrithi Srikanth is confident and the same goes for Sahejmeen Kaur. Deepika Khanna is sweet.
Himesh Reshammiya’s music is in sync with the film’s mood. ‘Kangan Ruby’ has the chartbuster feel. ‘Done Kar Do’ comes at an interesting point. ‘Tere Saath Hoon Main’ is very touching and the best song of the album. ‘Bidaai’ is moving. ‘Tu Bichhde Toh’ is also well-tuned. Ishaan Chhabra’s background score is a bit loud but overall fine.
K U Mohanan’s cinematography is neat. Sumit Basu’s production design is realistic and the sets look straight out of life. Ankita Jha’s costumes are authentic and non-glamorous. Red Chillies VFX effect is great. Hemal Kothari’s editing is slick.
On the whole, RAKSHA BANDHAN is a touching family saga, with a highly emotional second half that uplifts the film. At the box office, it has the potential of attracting family audiences to cinema halls, especially in the Hindi belt and mass centres. The five-day extended holiday period is an additional bonus. It deserves a tax exemption for its social message.
Courtesy : https://www.bollywoodhungama.com/