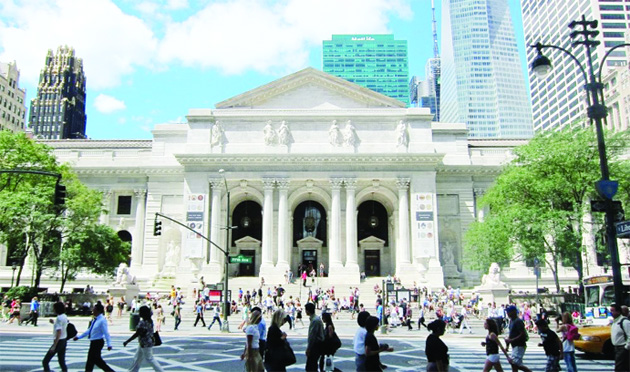 The New York Public Library’s reputation is established not only on its huge collection of books but also for its artefacts and divergent programmes aimed at expanding the sphere of knowledge, finds Ranjita Biswas on her recent visit.
The richly polished desk is where Charles Dickens did most of his prolific writing. In one corner of the hall is a poster announcing a performance by the legendary dancer Sara Bernhardt; next to it is another announcing famous magician Houdini’s forthcoming act. ‘The Written Word’ section includes samples from writings by such luminaries as Vladimir Nabokov, Virginia Woolf, W B. Yeats, etc. Religious texts, in the original, like the Gutenberg Bible, sacred texts of Islam on display. These, and other objects of interest are part of the ‘Treasures: The Polonsky Exhibition’ at the New York Public Library.
It came as a pleasant surprise on my visit there recently.
The objects on display are some of the most extraordinary items from the Library’s collection of some 56 million gathered through its 125 year history. They are living stories of people, places, and moments spanning 4,000 years-from the emergence of the written word through to the present day.
On another floor of the library a colourful world of insects aptly titled ‘Where Arthropods and Homo Sapiens Meet’ waited to be explored. A part of artist Peter Kuper’s forthcoming graphic novel, it is an outcome of his Fellowship as a researcher at the library. The exhibit traces the evolution of insects over 400 million years and narrates their interaction with Homo sapiens to this age. It is estimated that there are ten quintillion (add 18 zeros to 10 to get an idea!) insects on earth.
It was indeed an experience walking through the exhibition alive with cut-outs of butterflies, beetles and many other species with information on them at every step interspersed with nuggets like a haiku of Matsuo Basho (1690) “The cry of the cicada/Gives us no sign/That presently it will die” or ” Aristotle saw us as symbols of resurrection and immortality.”
It is also another example of how libraries have evolved from the profile strictly to do with reading and borrowing books. They can indeed act as a vibrant place for interactive activities, exchanging ideas and learning new skills.
The iconic Rose Reading Room is, of course, a must visit and there are free tours too (no talking loudly and no invasive photography). For bibliophiles , and for the sheer pleasure of soaking in the atmosphere with researchers and readers it is, to use a much-used term, ‘awesome!’ Many well-known Hollywood films like Breakfast at Tiffany’s , The Thomas Crown Affair, Finding Forrester, Network, etc. were shot here.
The New York Public Library’s history is intertwined with the city’s emergence as a major metropolis and cultural hub in the 19th century. It was a joint effort of far-thinking prominent citizens who donated generously, book lovers’ aspirations and the merging of two existing libraries which were going through a fund crunch.
When John Shaw Billings, a brilliant librarian, was named director of the institution, his idea of what a great library should be played a role in the architecture as he briefly sketched it on a scrap of paper. His plan called for an enormous reading room topping seven floors of stacks and the most rapid delivery system in the world to get the Library’s resources as swiftly as possible to those who requested them.
The cornerstone of the library was laid in May, 1902. Nine years later, more than one million books were set in place for its official dedication on May 23, 1911.
Today, the landmark marble building in the heart of the city with two lions on both sides at the entrance proudly announces its hallowed heritage. It is also spread across 92 locations and includes four research centres focusing on the humanities and social sciences, the performing arts, black history and culture, and business and industry.
The Library provides free and open access to its physical and electronic collections and information, as well as to its services for people of all ages. Research and circulating collections combined total more than 51 million items, among them materials for the visually impaired.
Additionally, each year the Library presents thousands of exhibitions and public programmes, including classes in technology, literacy, researching, and English for Speakers of Other Languages. Some 18 million patrons visit the Library every year; its website receives 32 million visits annually from more than 200 countries. (TWF)