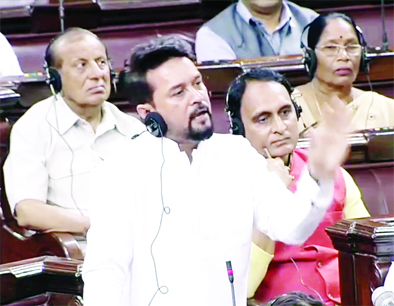 NEW DELHI, July 21: Information and Broadcasting Minister Anurag Thakur today said the Government blocked 94 YouTube channels, 19 social media accounts and 747 uniform resource locators (URLs) during 2021-22 for spreading fake news.
Responding to a question in Rajya Sabha, Thakur said these actions have been taken under Section 69A of the Information Technology Act 2000.
The Minister said that the Government has strongly acted against agencies working against the sovereignty of the country by spreading fake news and spreading propaganda on the internet.
Thakur said in order to check the spread of COVID-19 related fake news, a dedicated cell of the fact checking unit of the Press Information Bureau (PIB) was created on March 31, 2020, to which people can refer information related to Covid for verification.
The unit has responded to 34,125 actionable queries, including queries related to COVID-19, Thakur said, adding that the PIB has also busted fake news and 875 posts thereof on its social media platforms.
The Government has rejected the World Press Freedom Index 2022 published by international journalism not-for-profit Reporters Without Borders ranking India at 150th position out of 180 countries.
In a written reply to a question in the Rajya Sabha today, Union Information and Broadcasting Minister Anurag Singh Thakur said that the Government does not subscribe to the publisher’s views and country rankings. He questioned the methodology adopted by Reporters Without Borders saying it was non-transparent.
“The Government does not subscribe to its views and country rankings and does not agree to the conclusions drawn by this organisation for various reasons including very low sample size, little or no weightage to fundamentals of democracy, adoption of a methodology which is questionable and non-transparent etc,” the Minister said.
Thakur said the Government is committed to ensure the right to freedom of speech and expression enshrined under the Article 19 of the Constitution of India. “Press Council of India (PCI), a statutory autonomous body, has been set up under the Press Council Act, 1978 mainly to preserve the freedom of the Press and improve the standards of newspapers and news agencies in the country.
PCI considers complaints filed ‘by the Press’ concerning curtailment of Press freedom under Section 13 of the Press Council Act, 1978,” the Minister said. “PCI is also empowered to take suo-motu cognizance in matters on the pressing issues concerning freedom of Press and safeguarding of its high standards,” he added. (UNI)