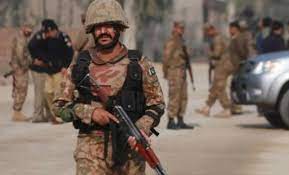 PESHAWAR, Mar 30: At least six security personnel were killed and 22 others injured on Wednesday in a terrorist attack on a security headquarter located inside a fort in northwest Pakistan’s restive Khyber Pakhtunkhwa province, a senior police officer said.
The terrorists attacked FC line in Tank district of the Khyber Pakhtunkhwa Province bordering south Waziristan, District Police officer Waqar Ahmed Khan said, adding that three attackers were also gunned down during the exchange of fire.
The injured have been shifted to the hospital, the officer said.
All roads leading to Tank district have been sealed and a search operation has been launched in the area to arrest the culprits, he added. (PTI)