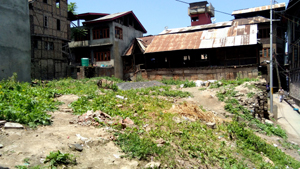 SRINAGAR, June 2: Authorities have failed to start the construction work of the community center-cum-marriage hall at Malikpora-Gadyar area of Zaina Kadal in the old city here, despite passing of 15 years.
As per locals, with an estimated cost of nearly Rs.396 lacs the facility was sanctioned in the area in 2002 and, subsequently, two kanals of land was delineated for the purpose. However, the failure of authorities to start the construction work has dashed the hopes of the people who were waiting for it.
The residents of the area said that due to congestion in the Malikpora-Gadyar area, there was no open space that they could utilize for large gatherings that is why Government officials decided to construct the hall in the space of an abandoned Government school building.”The building of this school was abandoned, we suggested to the authorities to construct a community centre here instead as space was left vacant and there was no other place available in the area,” Mushtaq Ahmad, a local said.
He said the community centre was expected to cover Malikpora, Zaina Kadal, Gadabazar, Zarabkhan, Gadyar, Saraf Kadal and other adjoining areas. “Due to the congestion in the area, we are suffering very badly when there is any marriage ceremony or any person’s death. We are forced to close the main road, which causes tremendous inconvenience to the public and transport. Now 15 years have passed, but nothing has been done,” Bashir Ahmad, another resident of the area said.
Nazir Ahmad, a resident said that one building of the school was demolished to clear the land for construction of the hall but work stopped thereafter. “We brought this to the notice of the Government but no one paid heed. Due to the non-serious attitude of the Government, the site has turned into a dumping yard. People throw garbage inside it, which now covers half of the land,” he said, adding: “After over 15 years of wait, we do not have much hope of the community centre ever coming through.”
Ali Mohammad Sagar, MLA Khanyar constituency said that due to some issue with the owner of the space on which the hall is supposed to be constructed, the matter is pending. “I discussed the matter at the recent Board meeting. I have reserved the money for the construction of the hall but the owner of the space is not allowing the construction work. I already talked with the Deputy Commissioner about the matter and he assured that the matter would be soon resolved,” he said.