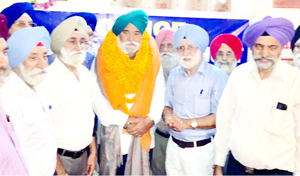 JAMMU, June 1: For being elevated as President of Hockey India recently, Rajinder Singh was honoured in an impressive function held in the office of Kashmir Sikh Sangat, here today.
Speaking on the occasion, Ex President KSS and social activist, Manjeet Singh said that his elevation as President is a moment of pride for all hockey lovers in the State.
S. Rajinder Singh has been associated with Hockey J&K  as well as with Hockey India  for more than three decades and has already been given responsibility of different positions.
The members said that another son of soil Narinder Batra is presently the President International Hockey Federation and President Indian Olympic Association.
While speaking on the occasion, Rajinder Singh said that he is committed to improve the state of hockey in J&K. He also thanked KSS for their support to hokey in the State and also for the respect given to him.
Prominent among others present on the occasion were Sewa Singh (President KSS) , Balbir Singh, S Babu Singh, KN Singh, Inderjeet Singh, Harbans Singh,  GS Bakshi, JB Singh and Gurdeep Singh.