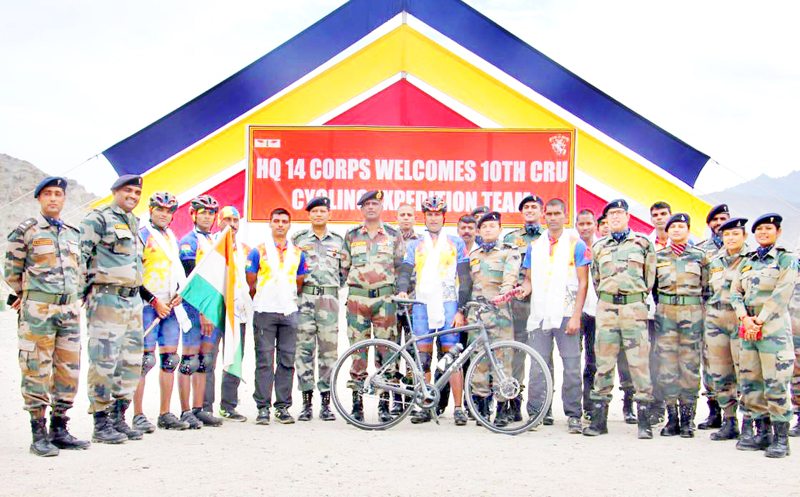 Excelsior Sports Correspondent
LEH, Sept 6: The unique Ultra Cycling Expedition called ‘Jai Bharat’, as part of the Platinum Jubilee celebrations of the Corps of Electronics and Mechanical Engineers, known as Eagles, of the Indian Army, was flagged off for the second part of Phase-1 of the Expedition from Leh to Kanyakumari by Maj Gen MJS Tiwana, Chief of Staff, Fire and Fury Corps, here.
The team comprising of seven ultra-cyclists had reached Leh on September 3, 2018 after successfully completing a distance of 2934 km from Secunderabad.
The three phase Expedition aims to cover 25000 km within 120 days and will pass through all the states of India, attempting at creating the Guinness World Record of most extended distance cycling through the country.
The Expedition was flagged off on August 15, 2018 by Lieutenant General Paramjit Singh, Commandant MCEME, Colonel Commandant from Secunderabad and will be completing the Golden Quadrilateral of India from Secunderabad to Leh and Leh to Kanyakumari in Phase-1, Kanyakumari to Tezu and Tezu to Koteshwar in Phase-2 and in Phase III the Cycling Team will travel from Koteshwar to Delhi.
Chief of Staff, Fire and Fury Corps complimented the team for undertaking this extremely challenging mission which symbolizes adventure, courage and fortitude of Armed Forces with indomitable spirit.