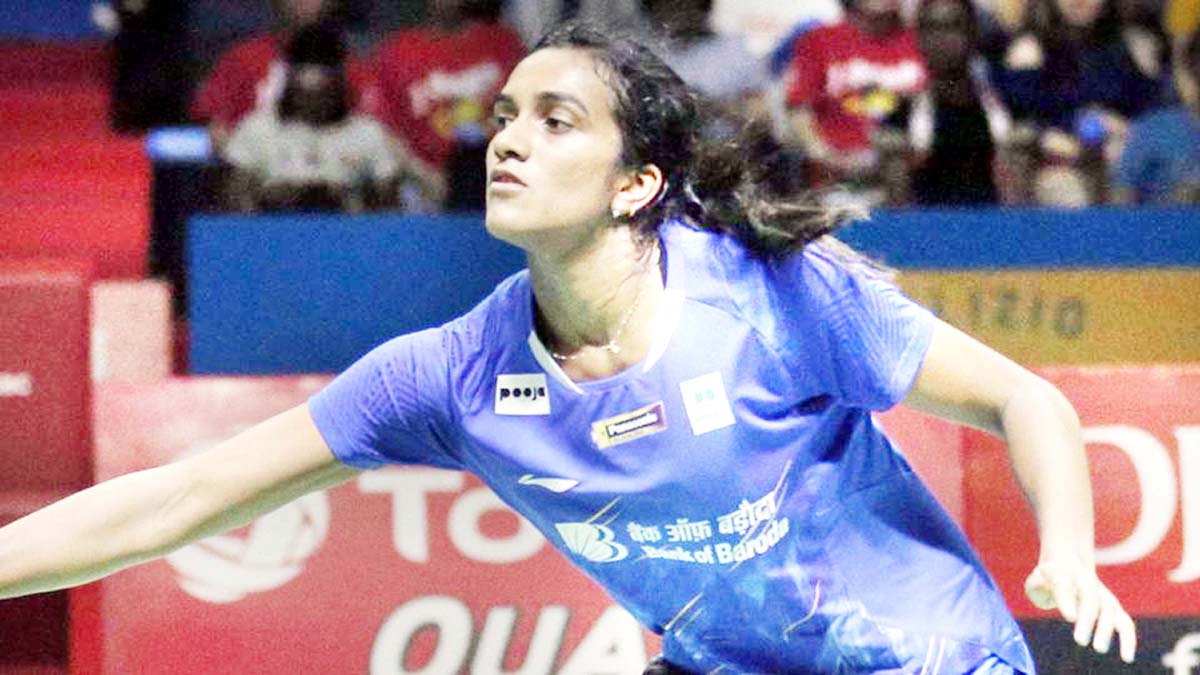 Basel (Switzerland), Aug 24: P V Sindhu stood one win away from an elusive World Championships gold after entering a third successive final but B Sai Praneeth settled for bronze following his defeat to Kento Momota here today.
Sindhu, who had claimed successive silver in the last two editions of the prestigious tournament beside two bronze, was a picture of perfection as she outclassed World No. 3 and All England Champion Chen Yu Fei of China 21-7 21-14 in a 40-minute semifinal.
The 24 year-old Olympic silver medallist will face either 2013 world champion Ratchanok Intanon of Thailand or 2017 winner Nozomi Okuhara of Japan in the summit clash on Sunday.
“I was well prepared and from the start I was in the lead and then finished it off,” Sindhu said.
“In the second game, I made some unforced errors and then I was leading again and it gave me my confidence. Overall, the game went well and I hope it goes well tomorrow.”
However, Praneeth’s impressive run ended after his attacking game couldn’t dent the defence of in-form defending champion Momota, going down to the Japanese World No. 1 13-21 8-21 in 41 minutes.
On Friday though, Praneeth achieved a rare distinction of becoming the first Indian male shuttler in 36 years to win a medal in the tournament.
Prakash Padukone was the first to win a men’s singles World Championships medal — a bronze — in the 1983 edition.
Sindhu, who came into the match with a 5-3 head-to-head record against Chen, grabbed the initiative quickly.
The Indian dished out a compact game, producing angled returns to push Chen to the corners. Sindhu retrieved well and punished any weak return from her rival to dominate the rallies.
Sindhu entered the first break with a 11-3 lead after the Chinese went wide.
Chen continued to find the going tough as she missed the lines, allowing the Indian to gather points at will.
Another weak return at the net by Chen gave Sindhu as many as 14 game points. The Indian sealed the opening game in her second attempt.
Chen made a better start in the second game and was neck-and-neck at 3-3 with Sindhu, but errors again crept in her game as Sindhu moved to a 10-6 lead.
Sindhu exploited a weakness in the backhand side of Chen to lead 11-7 at the breather.
The Indian worked hard during the rallies, not giving an inch to her Chinese rival and was rewarded for her effort. A desperate Chen committed too many unforced errors as Sindhu jumped to a 17-9 lead in a jiffy.
The Indian eventually grabbed eight match points with a cross-court smash. Chen saved a couple before hitting long again as Sindhu celebrated.
In the men’s singles semifinals, Praneeth made a good start to his semifinal clash, opening up a slender 5-3 lead. However, Momota slowly found his rhythm and turned the tables by entering the interval with a small 11-10 advantage.
The left-handed Japanese stepped up after the break, reeling off four points to surge to 15-10. Praneeth couldn’t find the winners regularly and committed too many unforced errors to allow Momota widen the gap between them.
At 12-18, the Indian found the net thrice to hand over the opening game to the Japanese.
Praneeth was more competitive initially in the second game as he was tied 2-2 with his opponent, but the Indian failed to lift the hard-hitting returns of Momota, sending the shuttle wide or at the net.
While Praneeth was erroneous, Momota was consistent and it reflected in the scoreline, as the Japanese quickly jumped to 9-2.
A precise smash from Praneeth helped him to take a point, but he misjudged a shuttle at the backline and then hit the nets, as Momota grabbed a 11-3 advantage in the mid-game interval.
Praneeth’s struggle continued after the break as he couldn’t put pressure on his fancied rival, who rode on his resolute defence to dominate the rallies.
At 15-5, Momota made a rare error when he sent the shuttle long but his quick backhand reflex near the net earned him the serve again.
A cross-court smash at Praneeth’s backhand took Momota to 19-8 and he grabbed 12 match points when the Indian hit the nets again.
Praneeth then went wide, paving the way for Momota’s march into the another final. (PTI)