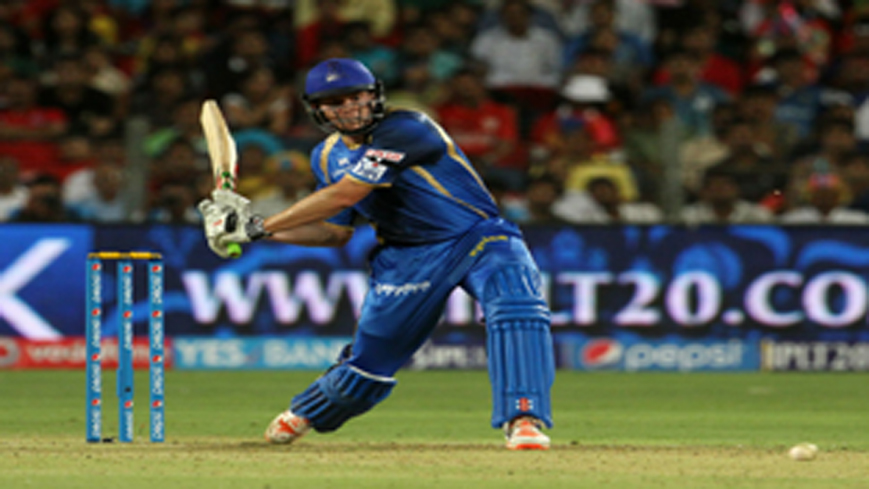 Jaipur, Apr 19:
Fast running out of time, a struggling Rajasthan Royals will hope to complete the double against Mumbai Indians in a return-leg IPL fixture and revive their campaign here Saturday.
With six losses and two wins, hosts Rajasthan Royals are languishing at the second last position in the points table and they would be desperate to bring their campaign back on track with a much-needed win here.
Rajasthan would be taking heart from the four-wicket win over Mumbai Indians at their own den last Saturday and will hope to get the better of their rivals once again, this time at home.
However, it will be easier said than done considering Rajasthan’s dismal record at the Sawai Man Singh Stadium. Apart from their lone victory against Royal Challengers Bangalore, Rajasthan have lost three matches at home.
England’s Jos Buttler has done the bulk of scoring for Rajasthan. His fiery 89 off 43 balls was the cornerstone of Royals’ four-wicket victory over Mumbai but rest the batsmen have either struggled or not been consistent.
Sanju Samson, who had hit the first ton of this IPL, too has not delivered in past couple of innings.
Skipper Anjikya Rahane, himself, has got starts but failed to convert them. His decision to go down the order in the last match also didn’t bear any fruit as Rajasthan failed to chase down 182 against Kings XI Punjab in Mohali the other day.
The likes of former Australian captain Steve Smith and England all-rounder Ben Stokes also have been struggling.
The pace-spin duo of Jofra Archer and Shreyas Gopal has spearheaded their bowling attack but rest of the bowlers have been far from penetrative and also proved costly in death overs.
In their last game, Rahane made some changes, bringing in Stuart Binny and Ashton Turner but while the former hit some lusty blows, the Australian was dismissed for a naught.
Rahul Tripathi did excel with a 45-ball 50 after returning to his favourite position at top of the order but he threw his wicket immediately after completing the fifty.
Mumbai Indians, on the other hand, have looked formidable this season with a good mix of power hitters, quality bowlers and perfect all-rounders.
The three-time former champions grabbed the second position after a dominating 40-run win over Delhi Capitals last night and would be eager to avenge their defeat against Rajasthan on Saturday to inch closer to the play-off berth.
If skipper Rohit Sharma, who completed 8000 runs in T20 last night, and Quinton De Kock laid the foundation at the top, the Pandya brothers — Hardik and Krunal, along with the big-hitting Kieron Pollard have provided the late charge to help MI post huge scores.
MI boosts of two of the best death bowlers in Jasprit Bumrah, who has taken 10 wickets from nine games so far, and veteran Sri Lankan Lasith Malinga.(PTI)