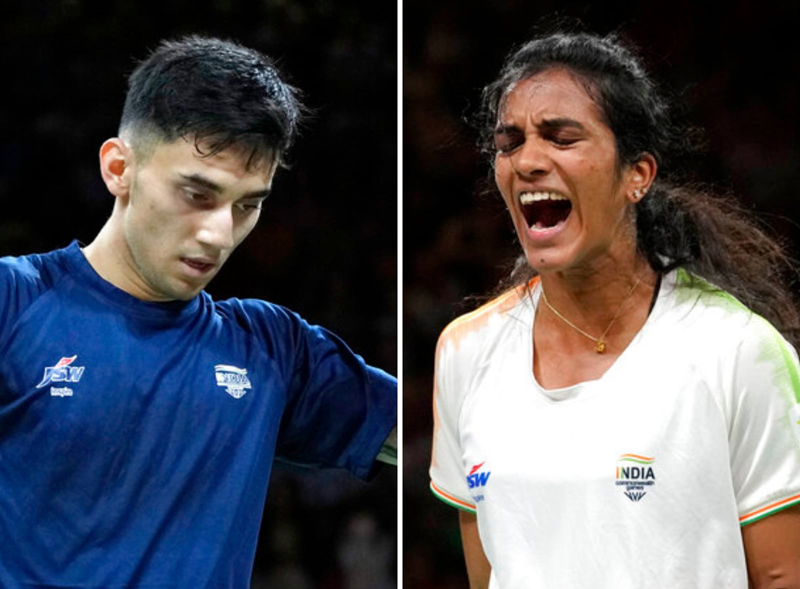 Double Olympic medallist P V Sindhu stayed on course for an elusive gold medal while Lakshya Sen regained his rhythm just in time to enter his maiden final at the Commonwealth Games here on Sunday.
Sindhu rode on her superior technical superiority to outwit Singapore’s Yeo Jia Min 21-19 21-17 in a 49-minute contest to reach her second successive final. The Indian had also beaten her in the team event.
In the following match, world number 10 Sen lost his way after a dominating start against 87-ranked Jia Heng Teh of Singapore. Sen however recovered to complete a 21-10, 18-21, 21-16 win in the men’s singles semifinals.
Satwik Sairaj Rankireddy and Chirag Shetty ensured a third gold medal match for India on Monday when they downed Malaysia’s Chen Peng Soon and Tian Kian Men 21-6, 21-15 to reach the men’s doubles final. The world number 7 duo was too good for the Malaysians.
It could have been an all-Indian men’s final but an error-prone Kidambi Srikanth squandered a first game advantage to lose to lower-ranked Tze Yong Ng of Malaysia 21-13, 19-21, 21-10. The world number 42 Tze had shocked reigning world champion Yew Kean Loh of Singapore in the quarterfinal.
After winning the opening game, the 13th ranked Srikanth made too many unforced errors to go down in the semifinals. From 4-4 in the decider, errors rained from Srikanth’s racket, leaving him frustrated on court. (PTI)
With the Malaysian leading 17-9, there was no point of return for the Indian who netted a forehand on match point.
The last edition’s silver medallist will now fight for the bronze and so will the Indian women’s doubles pairing of Treesa Jolly and Gayatri Gopichand who lost to the seasoned Malaysian combine of Thinnah Muralitharan and Pearly Koon Le Tan in the semifinals in straight games.
In the first men’s singles semifinal, Sen was stretched by his Singaporean opponent. He relied on relentless attack to put his Singaporean opponent on the backfoot and he was able to do that in the first game. A couple of forehand smashes on the Singaporean’s right helped him take a 1-0 lead in the match.
The momentum shifted towards Jia in the second game as he slowed the pace of the game. A drop shot followed by a backwand winner made it 8-8 before Jia went into the interval with a 9-11 advantage.
A slew of unforced errors from Sen saw Jia take the next five points to make it 9-16. Sen tried to hang in the game, but after the Singaporean took a shoe change break at 15-18, he was able to level the match when Sen hit a forehand long.
Sen built an 11-7 lead in the decider though Jia made the Indian work hard for every point. The Singaporean was also given a last warning for delay in between points.
Sen got four points and converted the first one with a deft drop shot that set up a backhand winner.
“I didn’t get in the rhythm in the second but I managed to pull it off in the end. The crowd support also helped a lot in the first game,” said Sen.
“It was a tough game today. I have played him before, so I was expecting a good, fast-paced match.
“I wanted to control the net much better, but overall and from the back, the defence was very good. That was a really good match before the final,” said Sen.
Earlier, former world champion Sindhu, who has a silver and a bronze from the 2018 and 2014 editions, was clearly the better player on display as she kept a firm grip on the match.
Sindhu seemed a bit restricted in her movement with the achilles of her left leg strapped. The Singaporean played some good-looking shots to make it 8-4 early on but she allowed the Indian to draw level.
Sindhu entered the break with a two-point lead after producing a straight drop. The Indian depended on her technical acumen, producing the right shots at the right time to surge ahead.
Yeo Jia Min was too erratic to put any pressure on the Indian, who moved to 19-12 with a perfect net shot.
The Singaporean used her cross court slices to trouble the Indian, making her move diagonally to reduce the gap to 16-19. But a forehand return going to the net from her gave Sindhu three game points, and she converted it on the third attempt.
It turned into a seesaw battle in the second game with the two playing some intense rallies, but Sindhu ensured she had her nose ahead at the interval.
A wide return and one going to net put Sindhu two points away from the final. She squandered two match points out of five before unleashing a pitch-perfect body smash to secure her place in the final. (PTI)