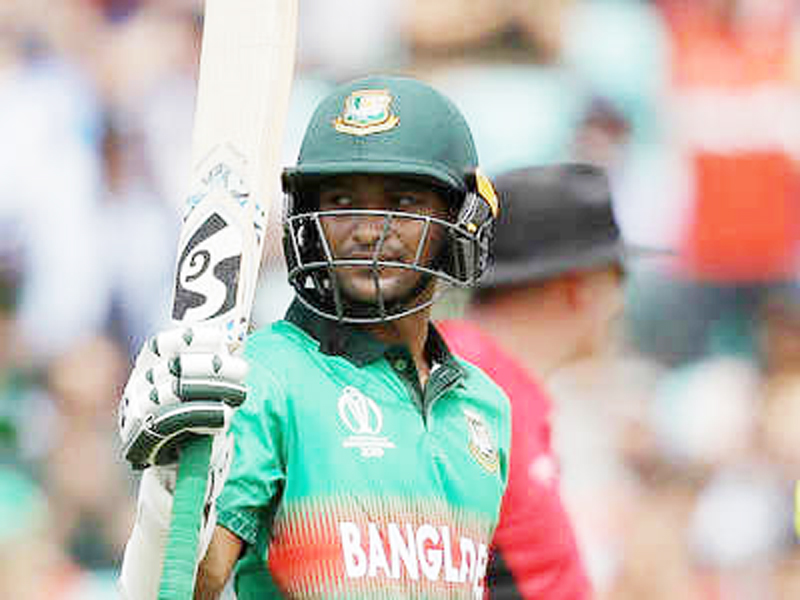 Taunton, Jun 17: All-rounder Shakib Al Hasan struck a magnificient unbeaten 124 to help Bangladesh record a comprehensive seven-wicket victory over the West Indies and script the second highest successful run chase in World Cup history here on Monday.
The 32-year-old Shakib (124 off 99 balls) produced a batting master class as he led Bangladesh to a famous win, chasing down the target of 322 with 8.3 overs to spare. He also took 2 wickets for 54 runs while bowling during the West Indies innings.
Liton Das also played a big part in the win as he remained not out on 94 off just 69 balls in a brilliant batting show. He hit 8 fours and 4 sixes in his knock.
The Shakib-Das stand for the unbroken fourth wicket yielded 189 runs from 22.3 overs to take Bangladesh to 322 for 3 in 41.3 overs and notch up their second win in the tournament after their 21-run victory over South Africa on June 2.
The highest successful run chase in World Cup history was the 329 for 7 by Ireland to beat England in the 2011 World Cup in Bengaluru while Bangladesh have also earlier managed 322 batting second, against Scotland in 2015 World Cup.
Shakib’s 124 not out, his ninth ODI century, was studded with 16 fours. In the process, he also reached the personal milestone of scoring 6000 ODI runs in his 202nd innings.
This was his second century in this World Cup after the 121 against England for a losing cause in Cardiff on Jun 8.
Bangladesh remained in the reckoning for a semifinal spot with five points from five matches while the West Indies will get tougher for a place in the last four as they now have three points from five matches.
The win was though not a surprise as Bangladesh had beaten the West Indies thrice in a tri-series in Ireland last month. But this was Bangladesh’s first win over the West Indies in a World Cup.
Bangladesh made a confident start to their run chase as they repelled the West Indies’ barrage of bouncers initially before slowly beginning to dictate terms on the Caribbean bowlers. In the end, it turned out to be an easy win with Shakib and Das taking their side home with 51 balls to spare.
Coming in the pivotal number 3 in the ninth over at team score of 52 for 1, Shakib stitched 69 runs with opener Iqbal for the second wicket before the 189 with Das.
Shakib, whose three innings in this World Cup read 75, 64 and 121, continued with his imperious form as he punished all the West Indies bowlers during his memorable innings.