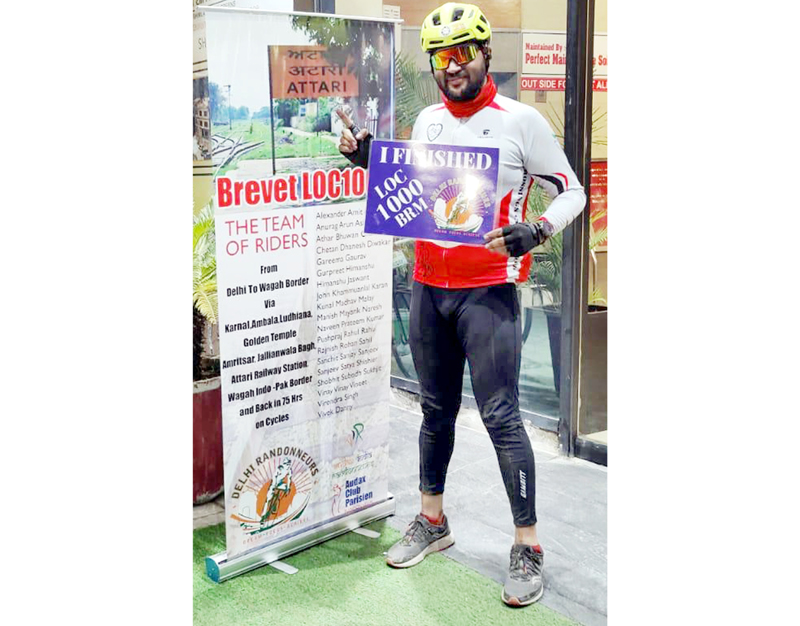 Excelsior Sports Correspondent
JAMMU, Dec 12: Beating chilly winters, J&K first cyclist Rahul Sharma, who is one of the founder members of the Jammu Hills Sports Club has completed his 1000 kilometers Brevet des Randonneurs Mondiaux (BRM) in 63 hours and 38 minutes, today.
The long-distance endurance cycling is being conducted over four days and each of the Randonneurs (cycle-tourists or participants) must complete the designated route in 75 hours.
Starting at 6 in the morning on Friday (December10) from Gurgaon via Sadar Bazar, Basai road, Sultanpur Sanctuary KMP Kundli, Karnal, Ambala, Ludhiana, Amritsar Attari Border and back on same route with finishing point at Kundli New Delhi. Rahul Sharma completed the distance in 63 hours and 38 minutes which is well before the allotted time of 75 hours.
The BRM is organized by Audax Club Parisien (ACP), an international governing body for all kinds of randonneuring. It also administers and oversees the conduct of BRMs worldwide.
Rahul Sharma has already achieved the title of ‘Super Randonneur’ this year by completing rides of 200km, 300km, 400km and 600km in the calendar year.
It’s a pleasure to see Randonneurs raising their graphs. Cycling and specifically BRMs have fired people’s imagination, inspiring them to push boundaries well beyond the norm.
Audax India congratulated Rahul Sharma who joined Audax India as a member in May 2020 and has been unstoppable further.