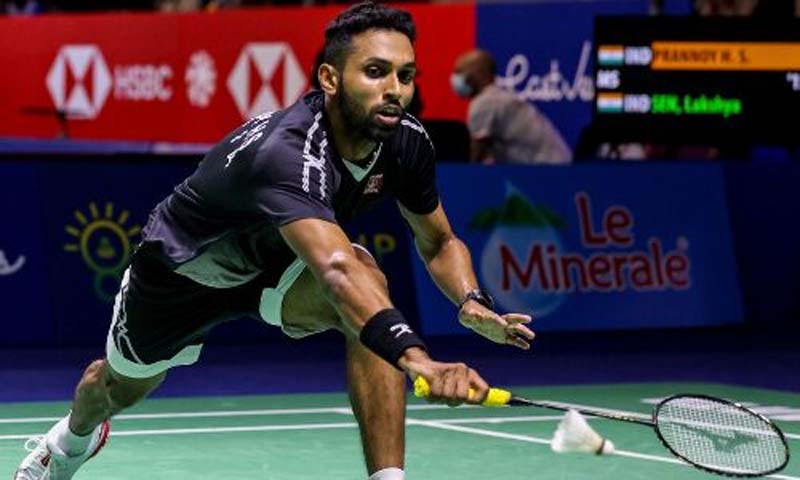 The 29-year-old from Kerala, ranked 21st currently, will face fourth seeded Chou Tien Chen of Chinese Taipei next at the Super 750 badminton tournament.

Prannoy’s win brought some cheers to the Indian camp after B Sai Praneeth and Sameer Verma made early exits.

This was eighth meeting between the two players with the Indonesian now leading the head-to-head record 5-3. They last played at the 2020 Asian Team championships where Ginting won the contest after Praneeth retired due to an injury.

In the men’s doubles, the duo of Satwiksairaj Rankireddy and Chirag Shetty displayed class and got the better of Malaysian pair of Chi Lin Wang and Yang Lee 21-18 21-11 in the opening round.

However, in women’s doubles, the pairing of Ashwini Ponnappa and N Sikki Reddy bowed out of the tournament after losing 15-21 11-21 to Japanese duo of Nami Matsuyama and Chiharu Shida, seeded sixth.

Prannoy was slow off the mark but opened up a healthy 11-7 lead at the break. His strokes penetrated the defence of his opponent, who looked little passive as the Indian was rewarded for his alertness and better control in the rallies.

The Indian kept putting the shuttles on the right areas and with Liew making some uncharacteristic errors, Prannoy’s lead was not threatened.

In the end, it was another return at the baseline which gave Prannoy the bragging rights.

After the change of sides, Liew took a 7-4 advantage with Prannoy going to the nets repeatedly. The Indian soon turned the tide with his smashes on his rival’s forehand.

After the break, Prannoy tried to play at a good pace but a series of unforced errors, mainly at the net, handed four game points to Liew and he sealed it with a smash.

In the decider, Prannoy moved up 6-3 but Liew again clawed his way back with three points, including an excruciating rally which left the Indian flat on the ground.

The duo played with electrifying pace and Prannoy managed to eke out a three point cushion at the interval.

The second half of the decider was a roller-coaster ride as Liew kept breathing down Prannoy’s neck but the Indian ensured he had the last laugh, sealing the contest with another powerful smash.  (PTI)