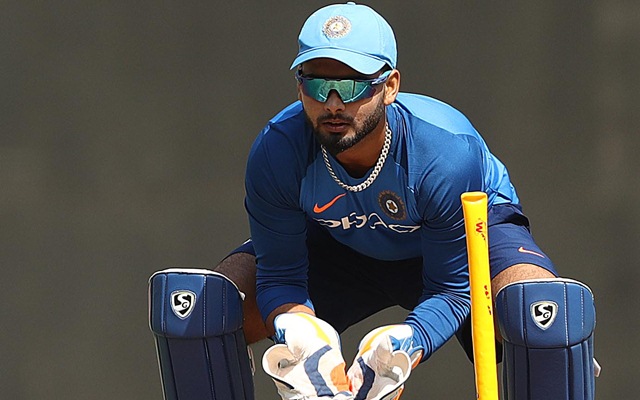 BENGALURU, Mar 13: Rishabh Pant put Sri Lankan attack to the sword with a record-breaking half-century while Shreyas Iyer yet again conjured up a measured fifty to let India grab complete control of the second Test here on Sunday.

Pant’s 31-ball 50 and Iyer’s 67-run knock after useful contribution from top-order batters meant that India set Sri Lanka a mammoth 447-run target after declaring their second innings at 303 for nine.

The struggling visitors would need no less than a miraculous show to save the match after ending the second day at 28 for one.

With plenty of time at their disposal after bundling out Sri Lanka for 109 in the first session of the day for a 143-run first-innings lead, India batters gained more experience of playing with pink ball on a wicket that assisted spinners.

Like in the first innings, it was Pant’s blitzkrieg that forced Sri Lanka into complet submission. He did not let them gain momentum after getting breakthroughs.

Pant’s game-changing innings let Iyer play freely and that certainly helped India to extend their lead beyond the 400-run mark.

Iyer carried from where he left in the first innings, scoring 67 off 87 balls with help of nine shots the fence.

There is never a dull moment when Pant is at the crease and it did not change today. He cut, pulled, swept, reverse swept, drove, charged down the wicket at will and raised his fifty off just 28 balls with 40 of those runs coming in boundaries.

It was the fastest Test fifty by an Indian, obliterating the 30-ball effort by Kapil Dev against Pakistan in 1982. He fell for an even 50, becoming the third scalp of left-arm spinner Praveen Jayawickrama (4/78).

The Indians scored at a good pace throughout the day with Lankan bowlers failing to exploit the spin-friendly conditions.

Rohit was calculative in shot selection before lofting off-spinner Dhananjaya de Silva straight to Angelo Mathews for 46. His footwork looked good, he largely swept left-arm spinners and charged down the wicket to smother the off-spin of De Silva.

However, he could not resists the temptation of going after De Silva when he closed in on a half-century.

Before walking back, Rohit added 42 runs with fellow opener Mayank Agarwal (22) and 56 for the second wicket with Hanuma Vihari (35), who also frittered away a solid start.

Agarwal edged one from left-arm spinner Lasith Embuldeniya (3/87), who got the ball to turn away from good length and had the Indian caught by De Silva.

Vihari, who would ideally like to make the number three spot his own, missed a straighter one from Jayawickrama and lost his off stump.

The string of low scores means that Kohli is now averaging below 50 after years of consistency.

In the morning session, fast bowler Jasprit Bumrah (5/24) completed his eighth five-wicket haul and first at home as India polished off the Sri Lankan lower-order in a jiffy.

Stumper batter Niroshan Dickwella (21) started off with consecutive boundaries off Bumrah. He opened the face of the bat to gently place the ball between the gaps.

Ashwin expectedly bowled from the other end and troubled Embuldeniya (1) straight away, his balls turning from the rough.

Embuldeniya could not handle a short one from Bumrah, miscuing a pull to be caught by Rishabh Pant. That was an irresponsible shot under the circumstances.

Surnaga Lakmal showed intent to stay at the wicket but could not read a carrom ball from Ashwin and saw his timber disturbed. This was immediately after he lofted one over mid-on for a boundary.

Bumrah completed his five-wicket haul when he had Dickwella caught behind. The short ball jumped off the track, touched the shoulder of the bat before going into Pant’s gloves.

Vishwa Fernando went after Ashwin in the next over but was soon deceived by another carrom ball and was stumped by Pant as the batter had lunged forward. (PTI)