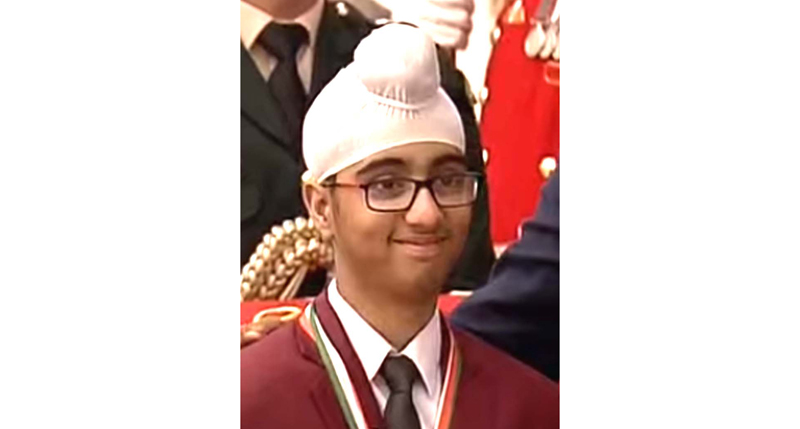 Excelsior Correspondent
JAMMU, Jan 24: Recognizing the extraordinary achievement of Onkar Singh, a prodigy from BSF Senior Secondary School Jammu, DG BSF, FHQ New Delhi, has awarded him a cash prize of Rs 25000.
Earlier on 22 January, Onkar was conferred with Bal Shakti Puraskar 2020 for his exceptional achievements in scholastic field by the President of India Ram Nath Kovind at Rashtrapati Bhawan, New Delhi.
Forty-nine children in the age group of 12 to 18 years won the award in the field of innovation, social service, scholastic, sports, art and culture and bravery. Bal Shakti Puraskar award carries a cash prize of Rs 100000, a tablet, a medal, a certificate and a citation.
Onkar Singh, at the age of 12, penned down his debut book titled ‘When the Time Stops.’ It is based on a complication of 15 theortical stories and theories of time. This book led him to achieve many awards including the World record for the “Youngest Theoretical Author”.
In the year 2019, Onkar Singh got his second world record registered for ‘World’s Youngest Webmaster (Male)’ from World Record Certification Limited, London. He is also the founder of two companies namely Batra Technologies and United India Publishers. He has developed around 57 websites of which the best three are: www.globalpublishing.webs.com, worldrecords.8b.io and nywc19.rf.gd.
He will also be a part of the Republic Day Parade on January 26 and get the opportunity to interact with the Prime Minister Narendra Modi.
Onkar Singh is the pride of BSF School Jammu. He has brought laurels to this prestigious institution with his spectacular achievement. Chairman of the School, N S Jamwal, IG BSF Jammu FTR, Hardeep Singh DIG/PSO Jammu FTR, Dr S K Shukla, Principal BSF School Jammu and staff members have expressed pride and joy over his achievement.