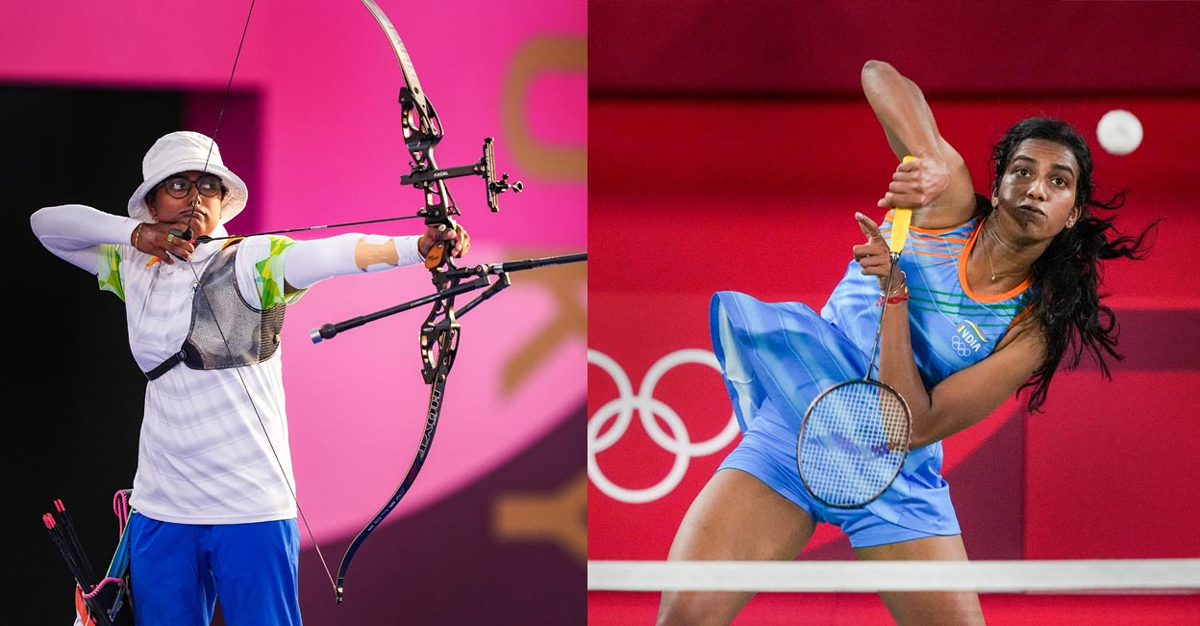 It was the sort of day when almost everything unfolded as it was expected to for India in the Olympics.
So, badminton ace P V Sindhu and seasoned archer Deepika Kumari marched into the last-16 of their respective events, debutant boxer Pooja Rani (75kg) won her easy opening bout without a fuss to enter the last-eight stage and the women’s hockey team stared at early elimination after failing to upstage defending champions Great Britain.
It was, in a nutshell, another mixed day for the country which is waiting for its second medal after the spectacular silver by weightlifter Mirabai Chanu on the opening day of competitions.
Things started on a disappointing note with Rani Rampal’s women’s hockey team taking a 1-4 hammering from Britain, thoroughly punished for not grabbing its chances in the crucial match, which has now severely dented the side’s quarterfinal prospects.
There was some cheer in archery before things went haywire to an extent.
Three-time Olympian Tarundeep Rai defeated Oleksii Hunbin of Ukraine but lost to Itay Shanny of Israel in a shoot-off in the second round.
As Rai faded, a new star rose on the horizon in Pravin Jadhav, the son of a daily wage labourer in Maharashtra’s Satara, who stunned world number two Galsan Bazarzhapov of Russia 6-0 before expectedly going down to world number one Brady Ellison of the USA in the second round.
Deepika managed to stay on target in her clashes against Bhutan’s Karma and American Jennifer Mucino-Fernandez to make the last-16, struggling in the windy conditions overall.
Before that, Sindhu did her thing in the badminton court, outwitting Hong Kong’s N Y Cheung 21-9 21-16 to top her group and make the last-16.
There was minimum drama in that outing, the Indian going about her business like the world champion that she is.
“I found my rhythm from the second game on and I finished it off. It was a fast game and I made a couple of unforced errors. I changed my tactics and got things under control. This type of test is important before a big match,” the 26-year-old Indian said after the match.
In contrast, B Sai Praneeth endured a miserable day, losing 14-21 14-21 to Mark Caljouw of Netherlands in 40 minutes for his second defeat in Group D. He later confessed that he struggle with his confidence.
The 13th seed Praneeth just could not bring his ‘A’ game to the table once again and was pushed out of contention from the knockout rounds.
The boxing ring brought some good news for the Indians with Rani’s progression to the last-eight stage.
The 30-year-old two-time Asian champion out-punched Algeria’s Ichrak Chaib 5-0, thoroughly dominating a rival 10 years her junior.
Another expected result came in rowing where Arjun Lal Jat and Arvind Singh failed to qualify for the men’s lightweight double sculls final after finishing sixth and last in the second semifinal.
Arjun and Arvind clocked 6:24.41 in the six-team semifinal 2 at the Sea Forest Waterway.
The top three pairs in each of the two semifinals qualify for the final.
Arjun and Arvind have, however, produced the best ever Olympic performance by Indian rowers by reaching the semifinals. They will finish at least at the 12th spot.
There were no surprises in sailing either with K Ganapathy and Varun Thakkar languishing at 18th after four races in the men’s skiff 49er event.
On Thursday, a resurgent Indian men’s hockey team would look to seal a quarterfinal berth when it takes on defending champions Argentina in its penultimate pool match.
With two wins out of three games, world no.4 India are at the second spot in Pool A.
Also, six-time world champion M C Mary Kom (51kg) will fight her pre-quarterfinal bout against Colombia’s Ingrit Valencia, a boxer she has defeated both times the two have faced off.
Mary Kom is chasing her second Olympic medal, having won a bronze in the 2012 London edition.
In men’s boxing, debutant Satish Kumar, the first super heavyweight (+91kg) to make the Olympic cut from India, will open his campaign in the pre-quarterfinal stage against Jamaica’s Ricardo Brown.(PTI)