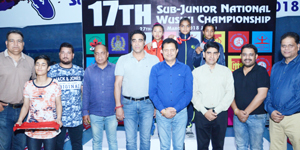 Excelsior Sports Correspondent
Udhampur, Mar 30: President Lok Vikas Dal, Vikram Singh Slathia expressed anguish over the poor condition of the only Stadium in Udhampur namely Subash Stadium.
Mr Slathia expressed anguish over the pathetic condition of the Stadium, while addressing media persons, here today.
He said the facility including pavilion and the hall at the Stadium has been constructed in an unplanned manner, adding that despite several requests and reminders to the district administration and the J&K State Sports Council for proper facelift of the Stadium, no action has been taken so far in this regard.
He further said the sportspersons of the district are in dire need of the proper infrastructural facilities at the Stadium, adding that sports enthusiasts feel disappointed and disgusted over the pathetic condition of the Stadium.
Slathia urged Sports Minister, Moulvi Imran Raza Ansari to visit Udhampur and take stock of the poor condition of the Stadium and direct the concerned to develop it properly.