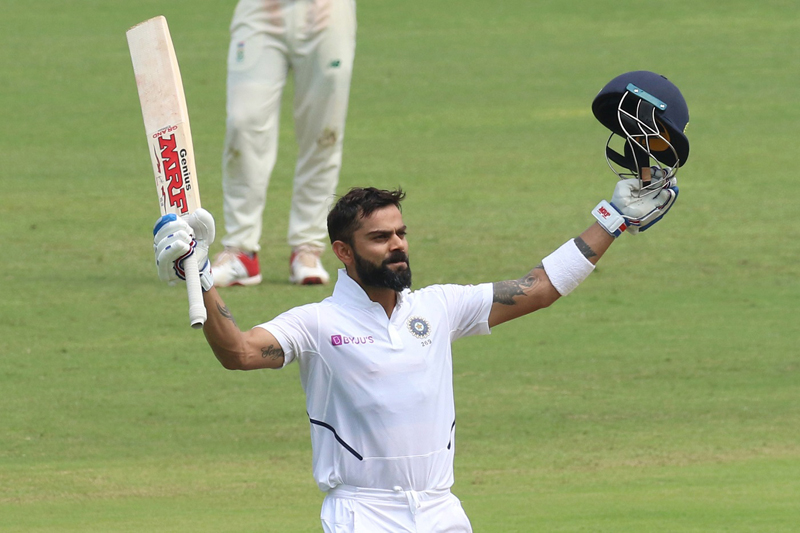 Pune, Oct 11: India captain Virat Kohli blended grace with determination to raise his record-breaking seventh double hundred which grinded down a hapless South Africa on the second day of the second Test, today.
Ravindra Jadeja (91) also helped himself with some heavy duty hitting before missing out on his second Test hundred as Kohli declared immediately after his dismissal.
At stumps, South Africa were reeling at 36 for three as India aim to wrap the series up inside four days.
Umesh Yadav got rid of both the openers — Dean Elgar (6) and Aiden Markaram (0) — while Mohammed Shami saw the back of Temba Bavuma (8).
Kohli effortlessly shifted gears, toying with an attack which looked resigned after the first session as India took complete control.
In the first session, a beautiful straight drive off Vernon Philander brought up Indian captain’s 26th Test and 69th international hundred and the muted celebration was more about contentment than elation.
The final boundary count in his innings was an enviable 33 fours and two sixes in 336 balls. It was a marathon knock as he alone faced 56 off 156.3 overs bowled in India’s innings.
Kohli was an epitome of concentration and with dependable vice-captain Ajinkya Rahane (59) he raised a 178-run fourth wicket stand which broke the spirit of the Proteas attack.
The partnership of 225 runs with Jadeja in 39.1 overs was like adding insult to the injury.
Not for once did he look in any sort of hurry to complete the milestone as Kohli was ready to respect the good deliveries, slowly trudging his way to the coveted three-figure mark.
South Africa will certainly feel dejected as their bowlers put up a good show even though the scoreboard suggested otherwise.
Kagiso Rabada (3/93 in 26) and Philander (0/66 in 26 overs), for the second day in a row, bowled a probing morning spell, albeit with little luck.
Credit to the skipper and his deputy for the manner in which they negotiated the first hour.
Kohli, in particular, was leaving anything that Rabada bowled on the off-stump channel for the first few overs. The only blemish was fishing at an away swinger from Philander, which a diving wicketkeeper Quinton de Kock failed to latch onto.
The bowler’s back-drive off Rabada came soon after as Kohli started opening up. Anrich Nortje also again tried to bowl short but Kohli played his trademark short-arm pull in-front of the wicket.
Once the ball got old, the South African spinners neither had the guile nor the big heart needed in adverse conditions to trouble a champion batsman like Kohli.
Kehav Maharaj again bowled 50 overs and gave away 196 runs for the consolation wicket of Rahane. However, not for once could he troubled Kohli, who attacked at will and defended when he wanted.
In between, he ran those singles and doubles, 110 of them all — a testimony to his stamina and fitness.
The inside-out six off Maharaj over extra cover was a treat to watch even as Jadeja at the other end was muscling away more deliveries than his skipper. In fact, such was South Africa’s misfortune that Senuran Muthusamy was found overstepping when Kohli had edged one to slip on 208.
If that wasn’t enough, Maharaj hurt his shoulder and was taken off the ground with the team management awaiting his scan report. (PTI)